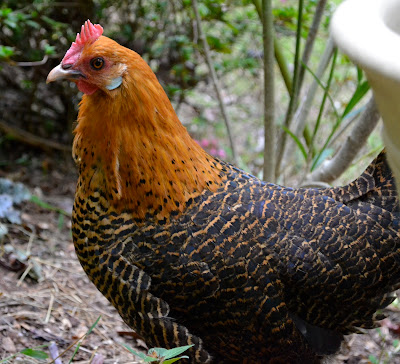 Why did the chicken cross the road? Why, to find some bargains, of course! Wouldn't you?

There's nothing more humbling than a Saturday morning knock on the door while you're caught lazing around in your PJs. Actually, it's most humbling when it's your next-door neighbor at the door, announcing that your chickens crashed her yard sale.

What can I say? I'm sure the girls just wanted a jump on their holiday shopping. 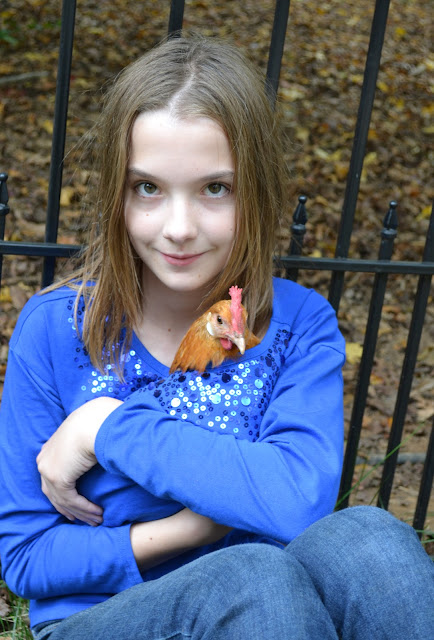 After all, they need the perfect gift for Chicken Mama.

Fortunately, our neighbor was gracious about the chicken invasion. Still, this wasn't the first time the girls flew the coop. In fact, our three little additions—Saltine, Sugar, and Spice—escape our yard frequently. Apparently, the dozen books Kiki read failed to mention that Golden Campines are flighty.

Very, very flighty. In fact, they would win gold medals for flying in the Chicken Olympics.

(In her defense, Saltine is a Barred Plymouth Rock, and she's not quite as flighty as the Campines. She just follows the lead of the two troublemakers.)

Flighty is both good and bad. Obviously, we don't want the girls bothering the neighbors. We allow them to free range in the forest—with supervision. When we can't supervise, they forage in fenced areas--around the pool or in their yard. However, while the older girls politely remain within our boundaries, the little delinquents take to heart “the grass is always greener” philosophy, escaping the fence.

Of course, when they escape the fence, not only do they potentially annoy the neighbors, but they also embark on suicide missions.

On one side of our backyard, where the naughty girls like to forage, our sweet dogs would happily use them as chew toys. So, when we let the girls forage by the pool, we keep the dogs inside. Outside the fence, the girls become potential snacks for roaming neighborhood dogs.

It's quite an adventure for a suburban dog. When another neighbor's dog rejoiced over his breakout, he hightailed it to our forest. After all, it was doggie paradise--three fluffy, yummy smelling treats to chase.

While we tried to catch the pup, our flighty girls used their wings wisely—Sugar escaped to the roof of our house, Saltine flew back over the fence.

We looked everywhere—the forest, neighbors' yards, the coop, the greenhouses.

After 15 minutes, I expected the worst. The dog still ran through the neighborhood, and I feared that Spice became his prize.

I stopped to catch my breath and looked up.

There, sitting on a tree branch peering down at me, perched Spice.

(Did I mention—all of this fun took place in my pajamas? I did manage to throw on running shoes. Now, there's a fashion statement. Hmmm...there seems to be a theme here. Perhaps I need to stop lazing around in my PJs, huh?)

After the near death experience—both for the birds, as well as my near heart attack—we decided it was time to convince Chicken Mama to let us clip her girls' wings.

It didn't take much convincing.

After all, she decided she'd rather keep her girls safe than win more blue ribbons at the county fair. 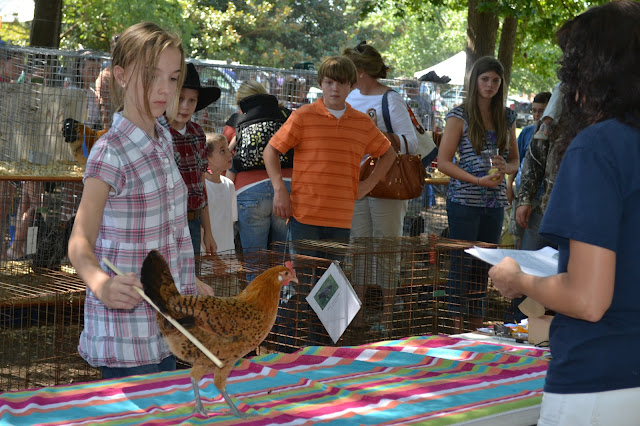 That afternoon, we gathered the troublesome trio in the back garden to perform the deed.

Actually, I did nothing but take photos. I'm a wimp.

It's really a very easy process, and it doesn't hurt the bird. Basically, you clip approximately 10 of the primary flight feathers on one wing. By clipping feathers on only one wing, the chicken's balance is disturbed, prohibiting flight. Experts recommend waiting until the chicken reaches maturity, because wing flapping and practice flights develop strength in young chicks. 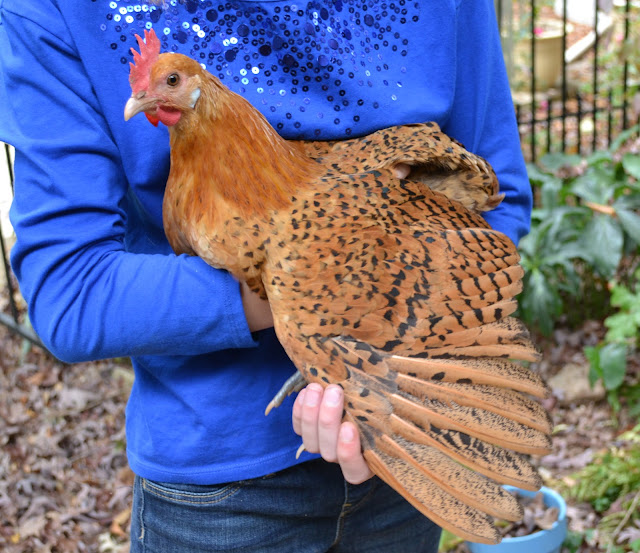 When selecting which feathers to snip, make certain you don't select any new growth feathers that contain blood in the shaft. (The shaft will have a pink tint if it contains blood.) Clipping a wing with blood in the shaft is painful for the bird and causes bleeding. In darker colored birds, you may need to hold the wing to a light to check the shaft. If you do accidentally cause bleeding, dip the tip of the feather in cornstarch and pinch it to stop the bleeding. Also, keep the bird separate from the flock until the wing heals. Blood or injuries encourages pecking. 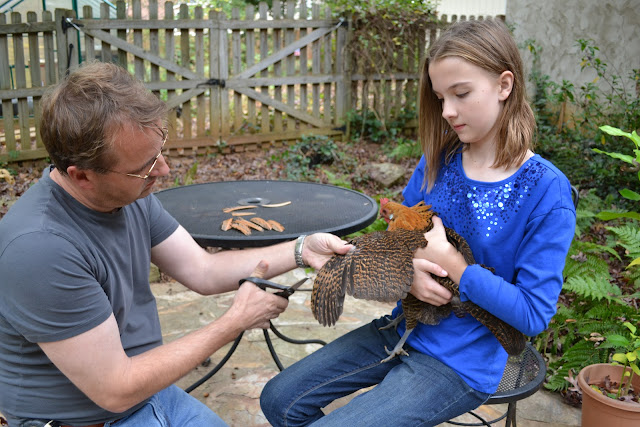 Wing clipping is a two person task. Kiki held the girls to calm them. Because you need to use sharp scissors, you don't want to try this alone. You don't want to hurt yourself or the bird. 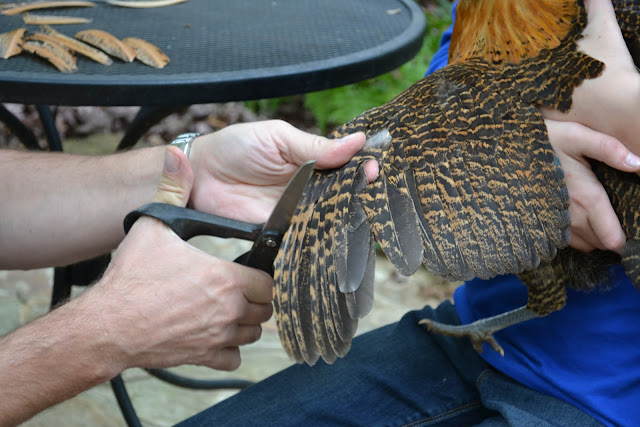 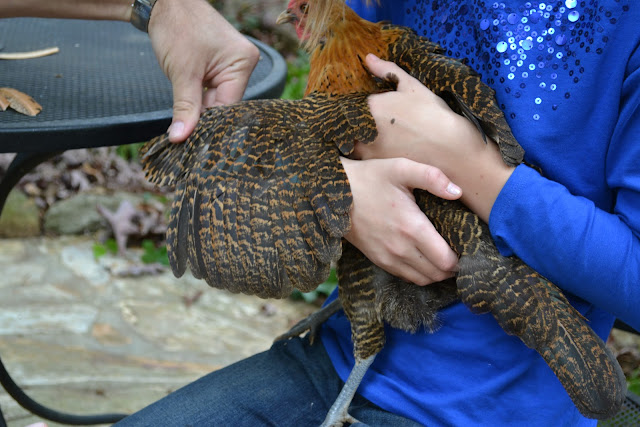 And that was it. Simple. Safe. And hopefully, the birds are now secured within the yard.

Then, Kiki, our future veterinarian, wanted to try it. 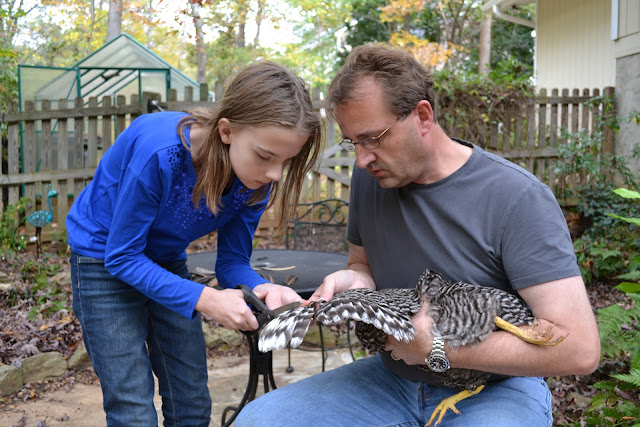 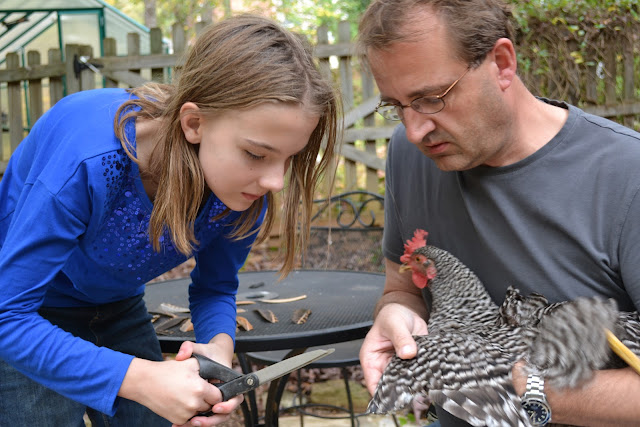 Honestly, how is this girl my daughter? She amazes me.

Just in case you like diagrams, there's a good one

An important note: Repeat wing clipping after your chicken molts. Once the new feathers grow in, those naughty girls will head for the skies again. 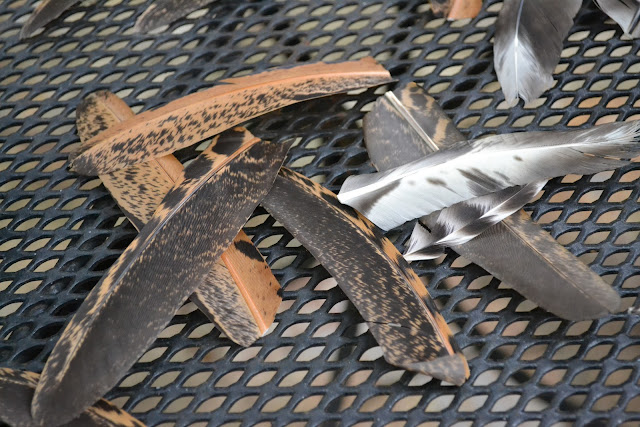 So, while Chicken Mama is now retired from the world of chicken shows, we're all resting a bit easier about our troublesome trio.

So far, they haven't flown the coop.

But then again, there haven't been any yard sales lately.

Happy December to You!

Happy December to you! Chicken Mama is busy, dressing her girls in their holiday finery, and I'm tackling the…

Happy Garden Bloggers' Bloom Day! Finding blooms in our garden posed quite a challenge this month, as we've officially…