Well, Day One of the official No Impact Experiment week was--hopefully--a blip in our family’s journey toward environmental enlightenment. Frankly, we sucked. For a day when we were supposed to curtail our consumption, take a look at our results:

I hope, if you are playing along, that you consumed less than we did today. I did keep all of our trash in a reusable bag for tomorrow’s portion of the experiment. Stay tuned...

On a happy note...I planted lots of heirloom garlic today, and I harvested the remaining basil tonight, since we might have frost. Tomorrow, I’m making a boatload of pesto...and I must say, my hands already smell delicious. 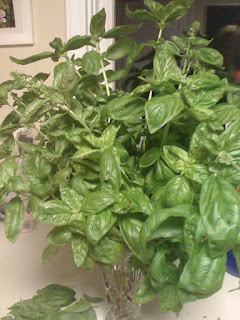 I’m taking my consumerist self to bed and hoping for better success tomorrow...Trash Day.

Will DSS Take My Children Away Due to the Piles of Trash Intentionally Left in the House?

Today is Trash Day. Ummm...actually, I was a little confused and thought trash day began yesterday, so we’…