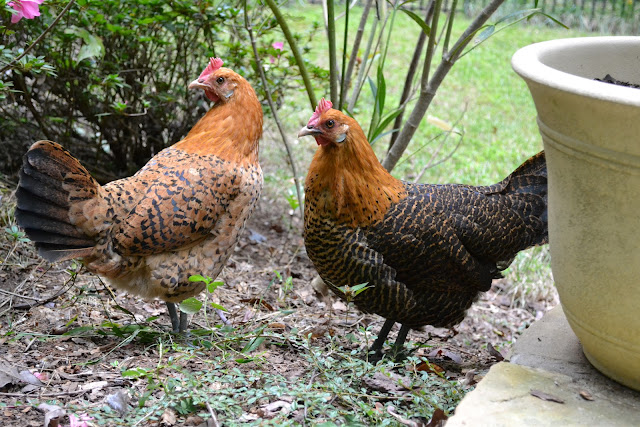 First of all, in case you remember way back to October 1, I planned to participate in

"31 Days" challenge. When October 15 arrived, I thought I would actually realize my goal--posting about "31 Days of Garden Delights" throughout October.

Then, this week, Peter and the Kristen stayed home, sick.

They shared their germs with me.

So, for the past two days, I've napped when I normally write. I've gone to bed at 10:30 p.m., instead of my usual 1 a.m. or later. Honestly, even if I hadn't spent the last 48 hours sleeping during every free second, my bleary brain couldn't find one topic that I cared to share.

I'm still pretty foggy, but while I'm upright, I thought I'd share some photos of my garden helpers/vandals. 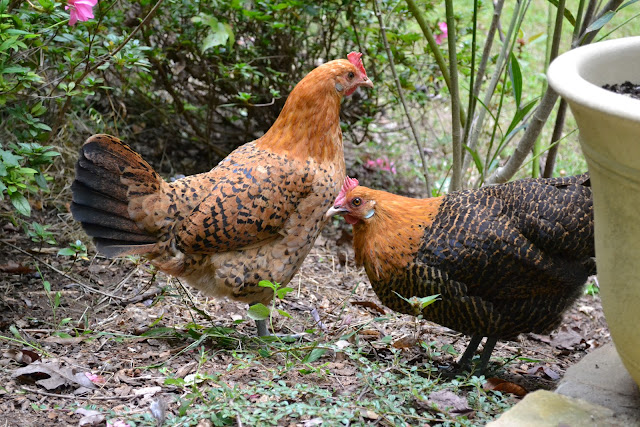 I'm conflicted by the popular idea of chickens and gardens coexisting. I know there's a book on the subject--which I haven't read yet. And every time I see a plan for a chicken coop with a green roof on Pinterest, I wonder how long that roof will remain green. Perhaps I'm missing something, but I know from experience that our girls need serious supervision in the garden--not only to keep them from flying to the dogs' side of the backyard, but also to prevent them from eating every plant in sight. 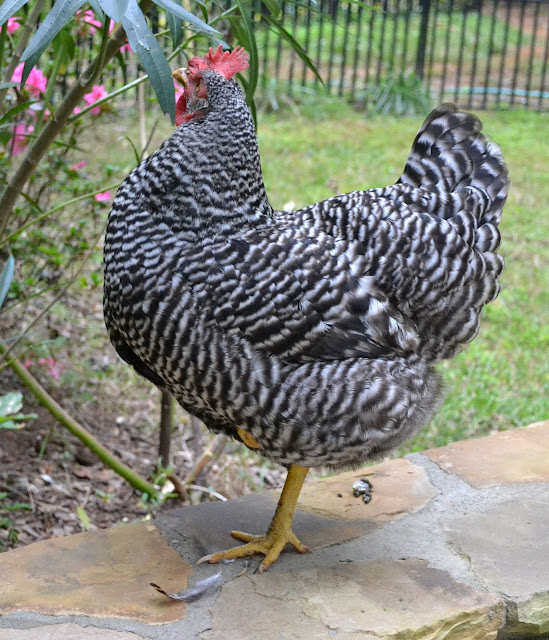 Trust me--my poor trays of lettuce, awaiting their new home in the potager, became a snack for some feathered culprits. 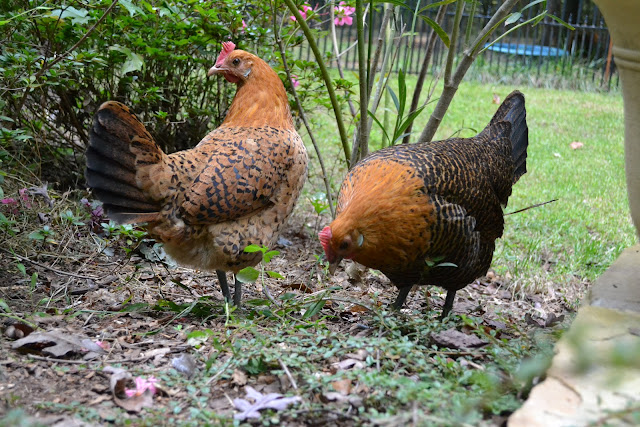 I was not happy. 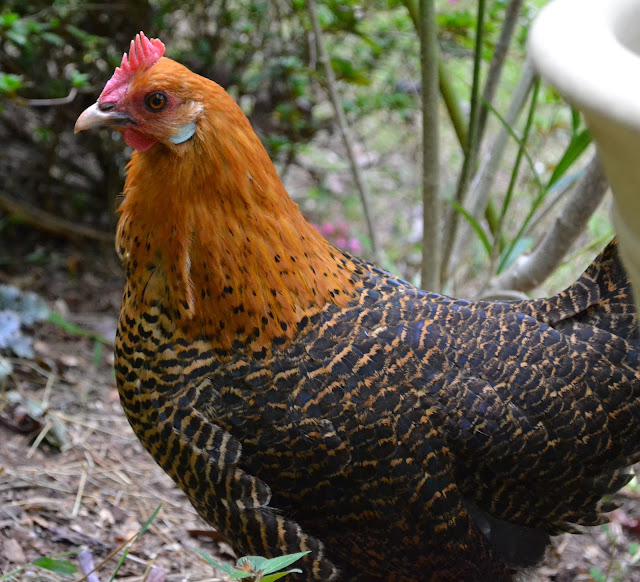 They look so innocent. 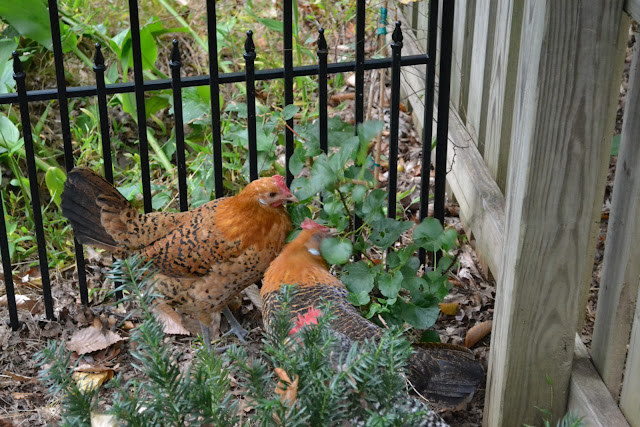 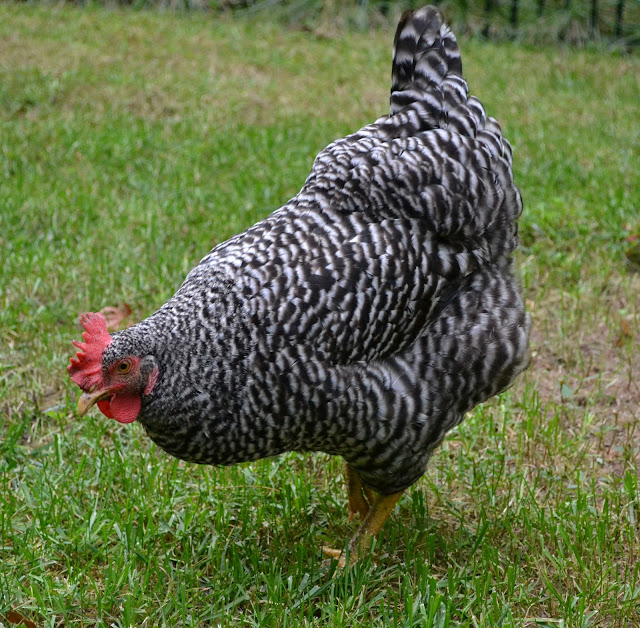 The gardens definitely benefit from the girls' insect patrols. However, they aren't selective in their foraging. All insects are fair game to them--pests as well as beneficials. 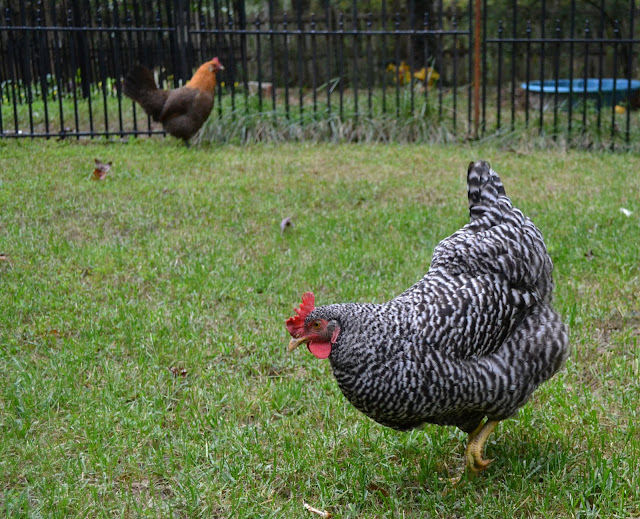 Although, I tend to forgive them for feasting on my plants and beneficial bugs, because honestly--watching chickens hanging around the pool is better than anything on TV. 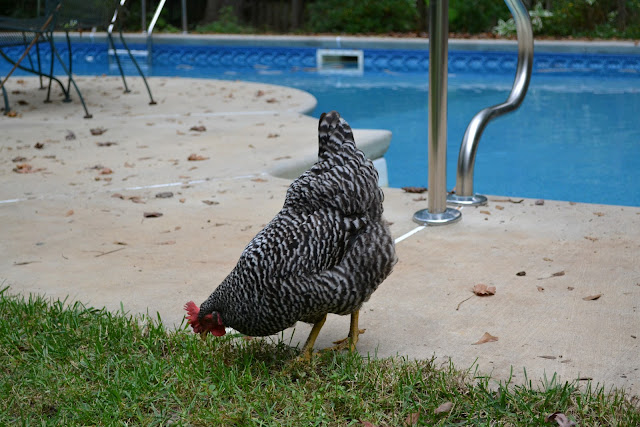 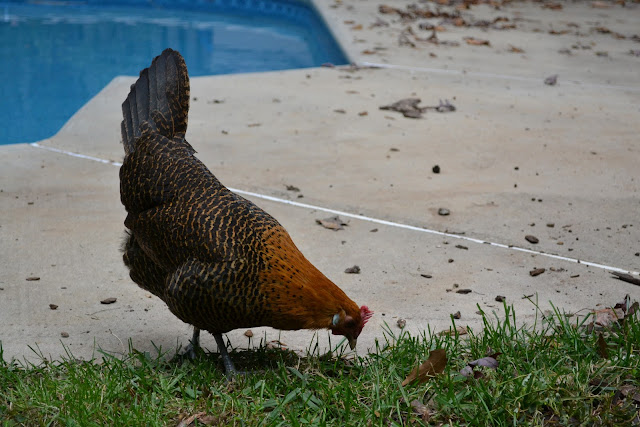 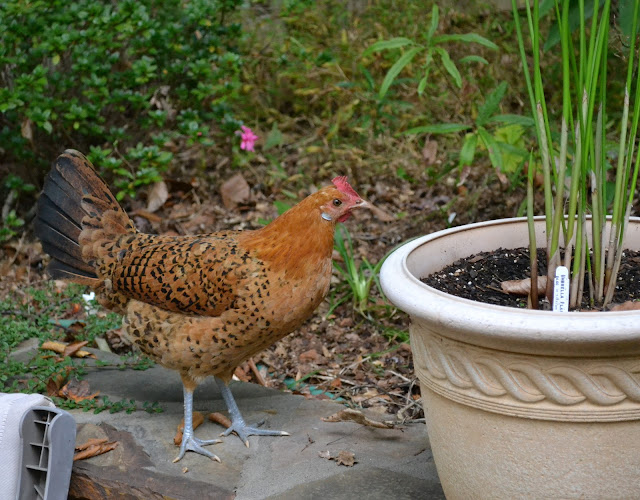 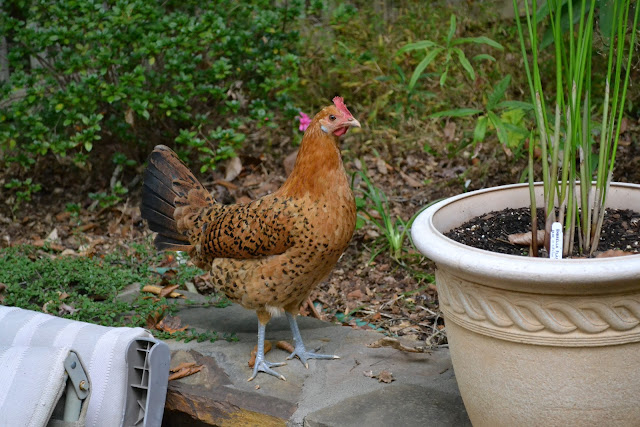 I'm training the girls to eat only weeds...in my dreams. I wish someone would write a book about how to teach a chicken to identify a weed and pull it from the garden. Now, that's a book I would buy! 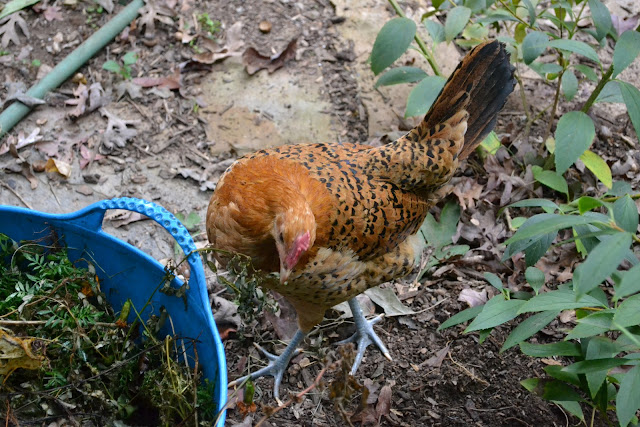 Weeds are a great treat. Usually, after a marathon weeding session, I take the bucket and dump it into the girls' area. It's great entertainment for them, scratching through the greens to find grubs and such. 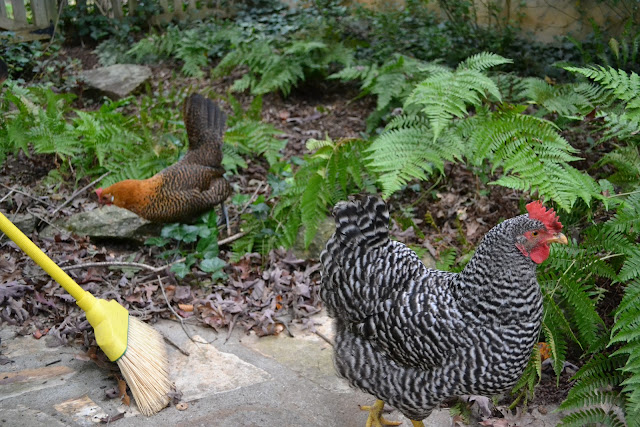 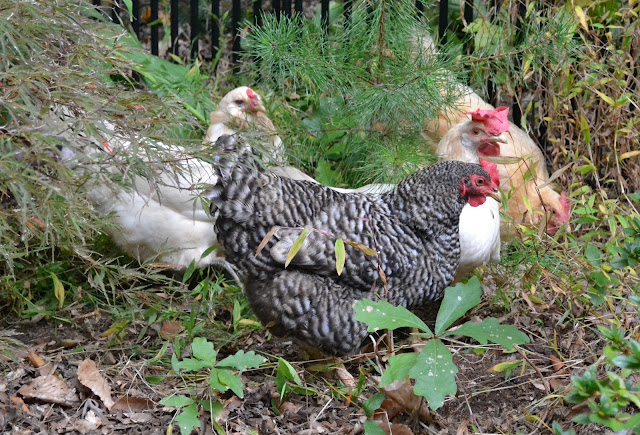 The original fabulous five, from left: Clue, Pepper, Meggie, and Risa. (Roxanne scooted out of the photo.) 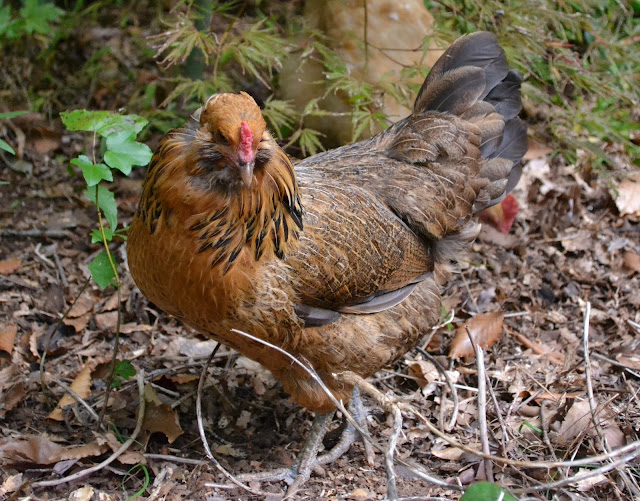 It's interesting. When we added the three chicks last spring--Saltine, Sugar and Spice--we read about how to introduce the young chickens into an established flock. It's not an easy task, and honestly--it needs to be considered carefully, or the babies can be killed. 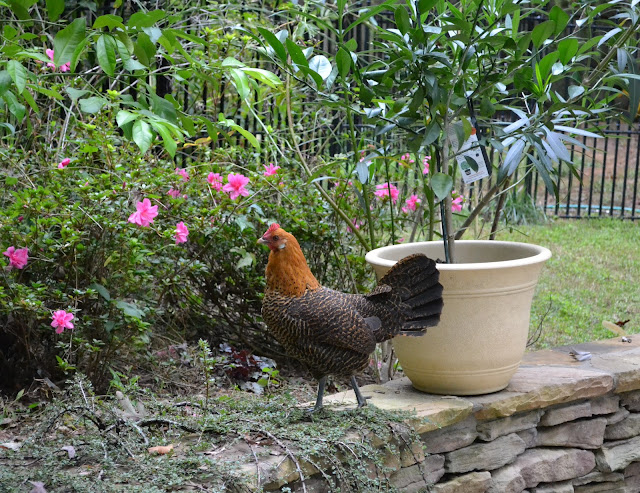 While the chicks were small, we used the portable run Peter built for the original flock and placed it near the area where we keep the big girls. Both flocks could see each other--but from a safe distance.

As the babies grew, we moved the run into the same space with the big girls, which is a large fenced area behind the pool, with the coop situated between the kids'/dogs' side of the yard and the pool side.

* (Note: Yes, our backyard is broken out by "kids' and dogs' side/pool side." It's crazy, but especially when the kids were small, we kept the pool area locked. Perhaps I need to consider a more formal name: "Jardin les Chiens et les Enfants." There, that sounds better. I don't know if it's correct, but it sounds good.)* 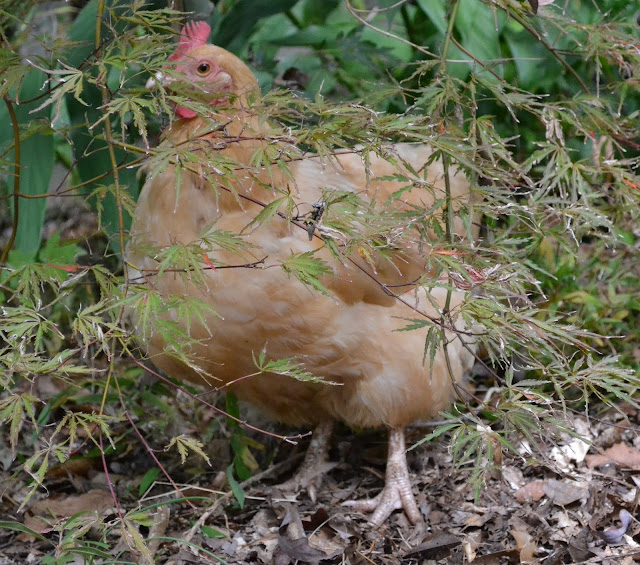 We then began supervised play dates. 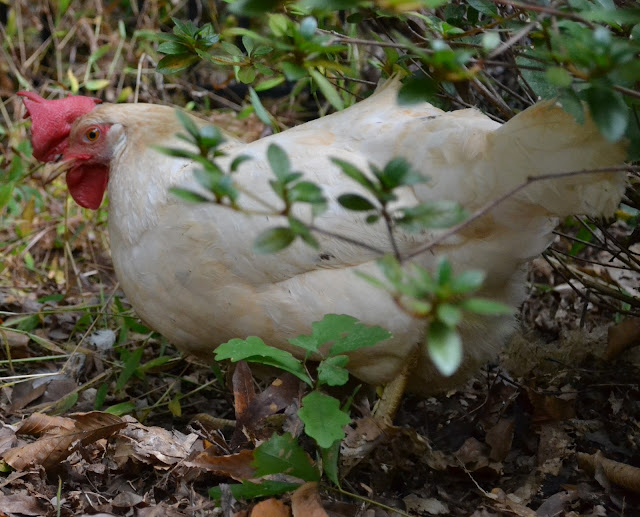 The girls roamed freely by the pool while the kids swam. And whenever one of the big girls began picking on a younger chicken, Kristen chased the bully away. 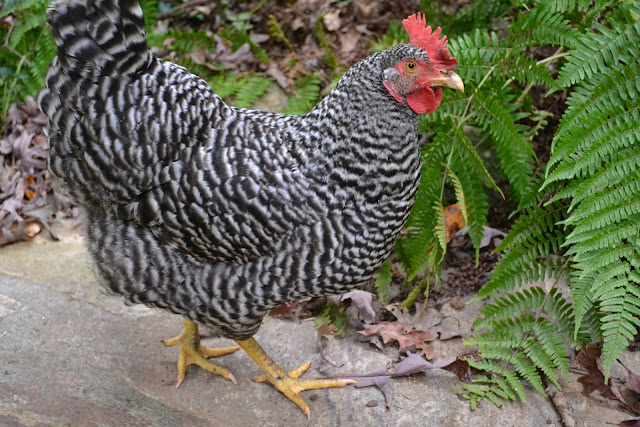 When that didn't work, we implemented another tactic: 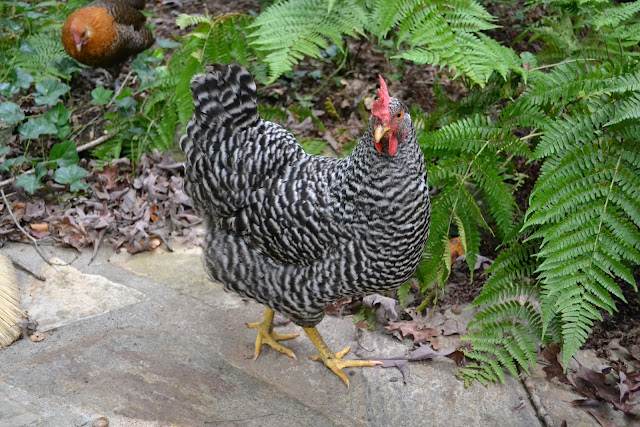 A quick squirt at the offender soon led to peace. 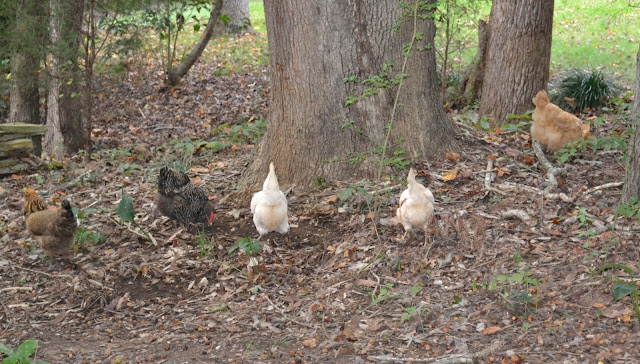 During the flock integration phase, we also kept the younger girls in a dog kennel inside the coop at night, just to make certain the big girls didn't haze them while we weren't looking. 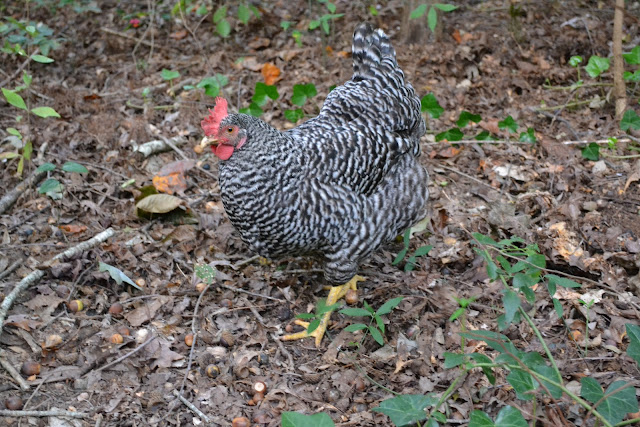 Interestingly, rather than accomplish a fully integrated flock, we now have two distinct flocks that tolerate each other. Regardless if the girls forage in the backyard... 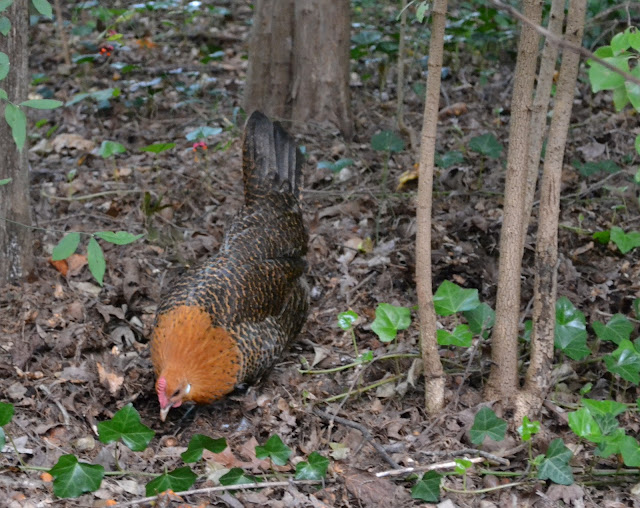 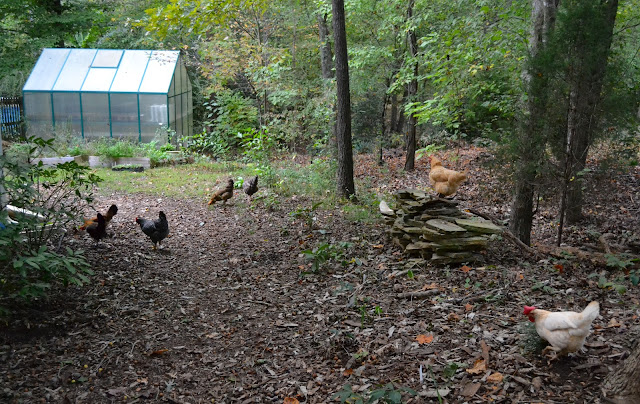 ...the side yard, or back by the compost pile, they stay with their flock of 3 or 5. 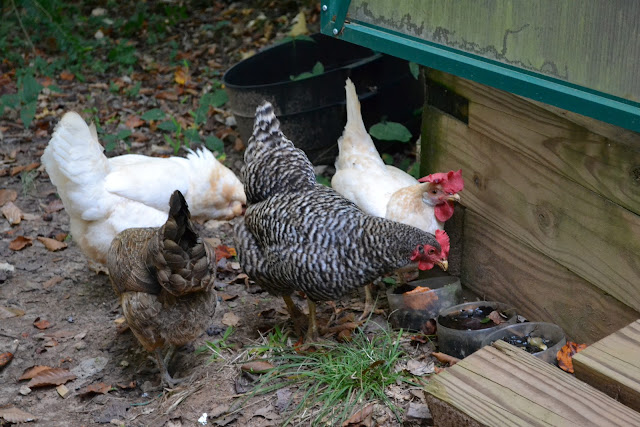 The big girls get a drink... 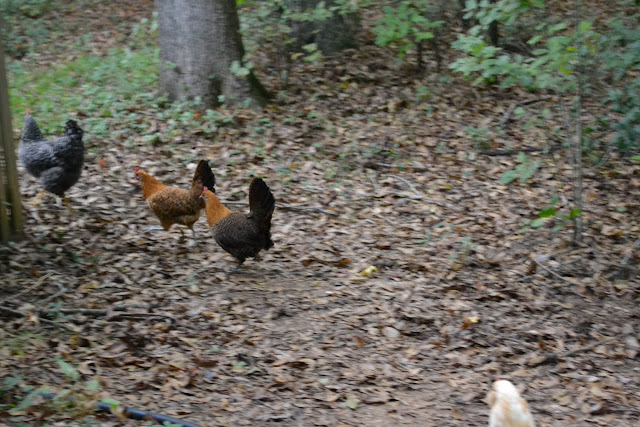 ...and off run the babies, heading for the compost pile. 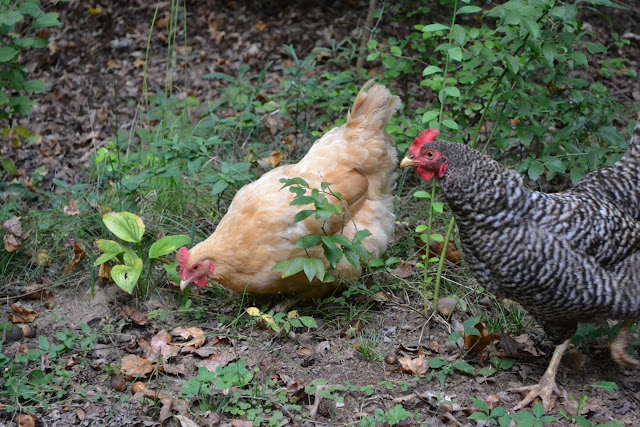 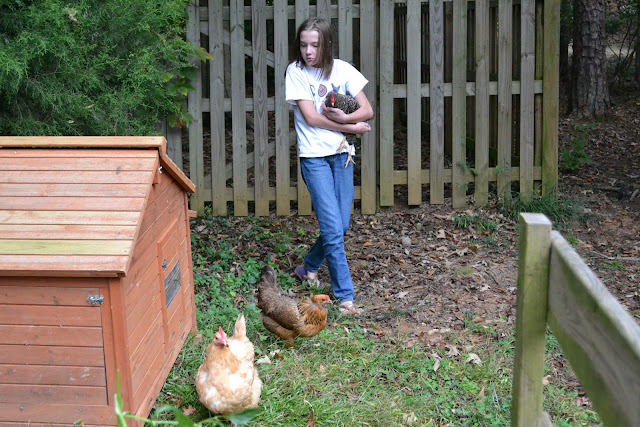 Play time is over, and Chicken Mama rounds up her girls. While we love to let them free range, we don't leave them out unsupervised. If I'm working in the large kitchen garden, we'll put the babies in the old, original coop/run (above) so they can forage safely while I'm busy. Not only do I worry about neighborhood dogs, but the girls also like to head toward our neighbors' house.

They are not chicken people. I want to keep the peace.

Today, though, the girls will be stuck in their area behind the pool, now known as "Le Jardin les Poules."(Of course, that's probably not correct, either. Any French speakers, please feel free to correct me. I obviously don't remember much of my high school French class.)  Kristen took grapes and pear scraps down to their area this morning, because I knew that I won't be out in the garden today.

In fact, I think it's time for two Advil and a nap.

Well. I'm alive. Seriously, for a moment yesterday, I worried that we might orphan our children. Instead, I'm relishing…

I'm disappointed in myself. Somehow, a very important day, one that means a lot to me--well, I missed it.…