Remember last week, when I wrote about my crazy issues with expectations? Well, after attending the amazing dinner produced by Outstanding in the Field at East Fork Farm, I assumed that no local farm-to-table event could possibly compare to Chef Dissen's delicious meal.

Take one noble organization: Hub City Farmers' Market. Add 14 local producers, seven prestigious chefs, a wine expert, a dozen volunteers, a lovely location with delightful hosts, and you have the recipe for a fabulous evening. 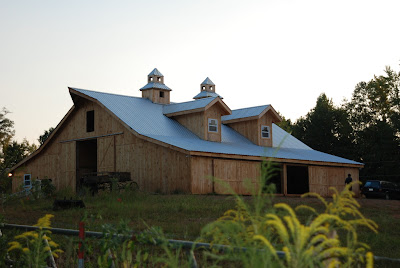 The Market staff are terrific people. Dedicated. Creative. Eager to introduce local producers to the community and, in the case of the Farm Dinner, the community to the producers. Foodies unite with farmers, bakers with buyers. Executive Director Ana Parra leads the organization, and her talents are instrumental in the growth of the market and its programs. The amount of preparation and attention to detail required for the inaugural farm dinner is a full-time job. 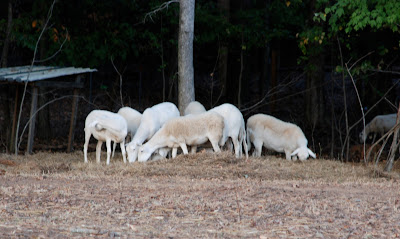 Live Oak Farms in Woodruff, SC, provided the perfect venue for a farm-to-table dinner. The hosts, Allison and Chuck Shaum, are committed to sustainability. Not only do they specialize in pasture raised, heritage breed animals, but their farm is a prototype for solar generated energy. The farm store, which stocks organic products, locally produced meats, certified naturally grown produce, and South Carolina seafood, is powered entirely by solar energy. Solar panels charge the electric fences surrounding the fields. The Schaums don't just talk about the environment—they protect the resources that provide their livelihood.

Did I mention that they are genuinely nice people? Allison is the kind of person who remembers everyone's name, who takes the time to listen to the crazy ravings of a customer who fears preparing her first organic, free-range turkey for Thanksgiving. She's also the mother of four children, so she's good at managing her high-maintenance customers like me.

I wish she lived next door.

After dropping Kristen off in Duncan for a sleepover and taking Michael to Simpsonville to spend the night with my sister and niece, we actually arrived at Live Oak Farms on time. Shocking. It's amazing how Peter and I are motivated by food...

But we weren't alone. The Schaum's barn was crowded with locavores, eager to support the cause. Or, perhaps the attendees weren't as altruistic as I imagine. Maybe they just wanted to feast. And drink.

No matter what the diners' motivations, they wouldn't be disappointed.

The setting was actually more formal than the Outstanding in the Field dinner. I know you're thinking: barn = formal? Really? OK, skeptics, take a look at the lovely tables...with assigned seating. 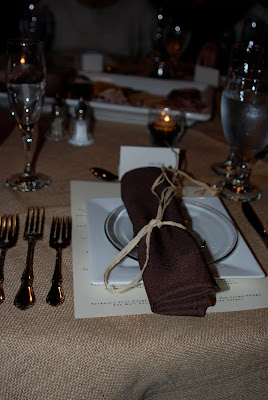 Our tablemates were terrific—two producers (Frances Davis from Windmill Hills Farm and Daniel Parson from Parson's Produce) whose vegetables starred in several of the courses, as well as the publisher of

and the new business manager of Converse Deli. I've known Daniel through Hub City Farmer's Market, and he's an incredible source of information about organic practices. Plus, he's just a really good guy who beams when he talks about his baby.

I hope he snuck some dessert home for his wife, who stayed home with baby Ben.

Samantha Wallace is the force behind the Upstate's newest publication,

. If you haven't seen the magazine yet, you can find copies of the premier issue at many local retail sources, including Live Oak Farms. The Upstate needed this publication—a source that brings providers and customers together, much like farm dinners. Through the publication, though, you can find more detailed, personal information about the growers, producers, and people behind local foods. It's a terrific resource, and I'm not just saying it because of the article about my seed saving venture.

While the food is, of course, the enticement for the farm dinner, the best entertainment is to watch people coming together in an effort to support one another. For instance, Daniel and Samantha had not previously met. I'm not sure how that's possible, but the dinner provided an opportunity for them to meet and talk a bit of shop. The manager of Converse Deli was equally happy to meet Daniel. Converse Deli supports local food, to the extent that they recently invested in a 10-acre farm. Until the farm produces the amount of food they require for the restaurant, Daniel might be a source.

All of this synergy occurred just at our table. Who knows what relationships formed among the other guests?

Back to the food. 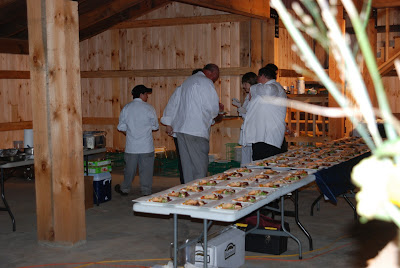 Is it possible to have too much food?

I tried to pace myself, really, I did. But with five courses paired with delicious wines, plus amazing breads (my downfall), plus dessert...I think I'm still in a food coma three days later.

Honestly, when there are seven chefs involved in a dinner, each course is designed to showcase that chef's talent. It's like “Top Chef,” but in this case, it's a friendly non-competition to benefit a good cause. Still—each chef wants to make certain that his or her course is delicious. And memorable. Our talented chefs included:

We began with the Charcuterie tray. Taken from the term cuiseur de chair, meaning "cooker of meat," charcuterie is a French culinary art dating to the 15th century. Originally a method to preserve food prior to the advent of refrigeration, it typically refers to pork specialties such as pâtés, rillettes, galantines, and crépinettes, which are made and sold in a delicatessen-style shop. 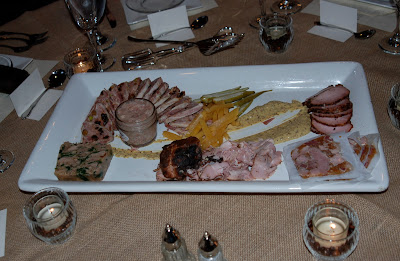 made by Tim Rogers 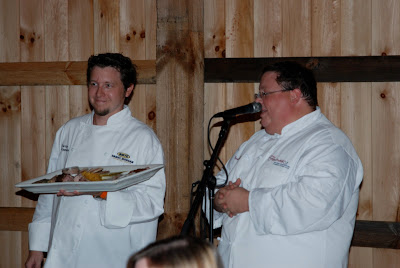 Boiled peanut relish? Oh. My. Who would have thought?  OK. Honestly, I could have stopped here. Between the meat and the bread, I was in heaven. 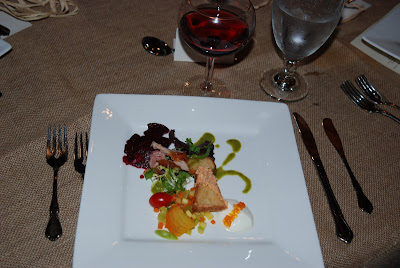 Smoked Carolina Sunburst Trout with a Crayfish Butter on Toasted Brioche served with a Matignon of Brunoise Garden Vegetables and a Lime Coriander Vinaigrette.

How does one make Crayfish Butter?

You know, I don't really care. The trout and butter were scrumptious. 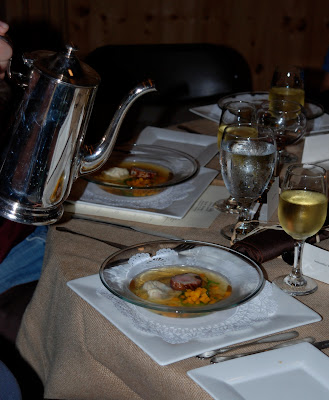 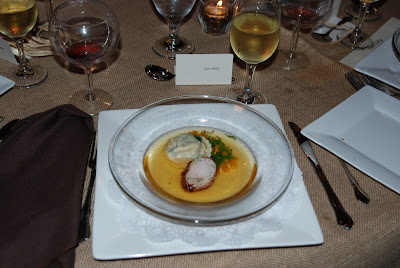 This course won the showmanship award, with the broth poured at the table. The scent alone added about two inches to each of my thighs. 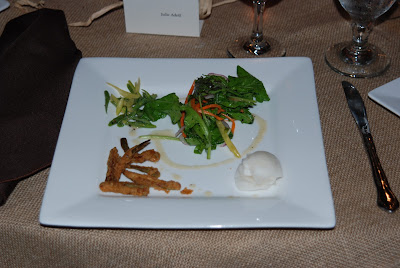 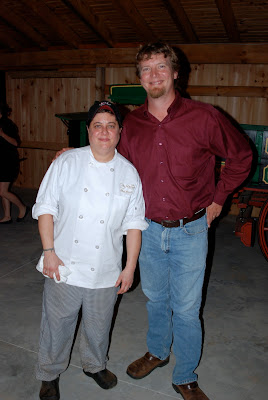 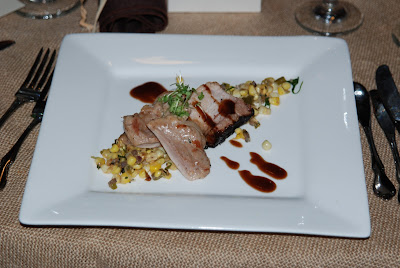 Or maybe my new favorite food is corn and bacon succotash. Bacon added to anything is good, but the corn was amazingly fresh on its own. My dad, a former farm boy, was a corn connoisseur. I know good corn.

At this point, I had a hard time sitting upright in my chair—and it wasn't due to too much wine. I needed a walk. Or a nap.

And then this arrived... 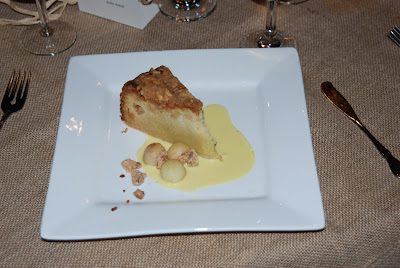 And the cheese plate... 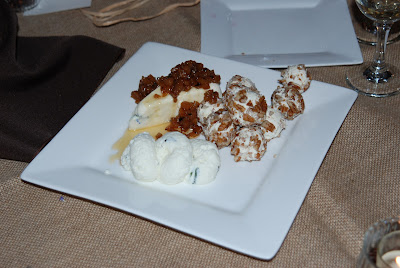 Anyone who knows me also knows that I never leave dessert. Dessert is my favorite course.

I couldn't conquer it. I ate half, wanting to lick the plate clean of the crème...and tried to figure out how I could sneak the rest of the cake home.

I apologize to the goats and the artisans who produced the cheese plate. It was lovely, but I already looked and felt about eight months pregnant by this point in the meal.

Besides trying to figure out how I could discreetly take my dessert home, I was also trying to determine how I could get Peter to carry me to the car.

Unfortunately, Peter made me waddle to car on my own.

More food? Who could possibly shop for food after eating five courses???

...and Peter and I went home, where I happily put on my oversized PJs...

Note to self: never wear control-top tights to a multi-course farm dinner.

Tales from an organic farm...

I blame Laura Ingalls Wilder. From second through fifth grade, I was obsessed with Little House on the Prairie.…