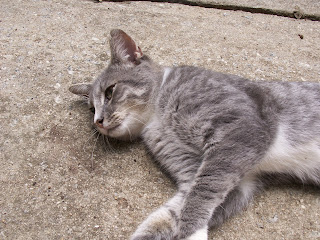 Our house is, quite literally, a zoo. With three dogs, two cats, a bunny, and two aquariums of fish, we spend an exorbitant amount of money on pet food and vet visits. But, that's the commitment we made when we added these furry friends to the family. Or should I say—when Kristen added them to the family.

We started with one dog—Maxi, a purebred Dalmatian. 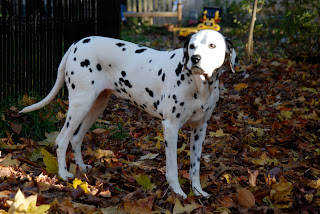 Next, we added Mimi the bunny, who actually turned out to be a boy. Let's just say—identifying bunny gender is not as easy as you would think.

Then came Murphy, a tiny little black kitten, who decided to find shelter from the rain—under the hood of Peter's car. Peter drove home from work, heard meowing in the garage, and found Murphy stuck near the engine in his car. I never wanted a cat. I'm allergic to cats. I'm a dog girl. Kristen saw Murphy. We had a cat. Actually, the cat was originally named Mia--until Peter took her to get spayed and discovered Mia needed to be neutered. Obviously, pet gender ID is not our strength.

Around this time, Peter found two baby squirrels that were abandoned. Guess who hand raised squirrels? And I wonder where Kristen gets her animal obsession? 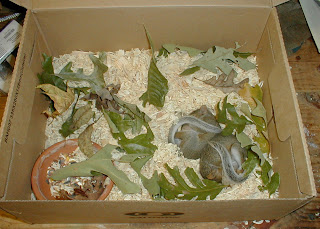 As soon as the squirrels were old enough, we released them into our backyard. Those ungrateful things came back often to eat the heads off of my pansies.

Next, Ringo. For whatever masochistic reason, we decided it was time for a puppy. Ringo was our first experience with adopting from a shelter. 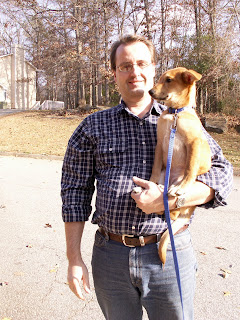 Peter and I thought we would visit a few shelters, take a look, and think about adopting a pup. Of course, we left the shelter that day with Ringo. He was a sweetheart of a dog, chewed everything in sight, and loved Peter. The feeling was mutual. Murphy, however, did not love Ringo—and disappeared. Heartbreak. And then Maxi and Ringo got out of our fenced yard. Devastation.

A month later, I received an e-mail. Our friend's son adopted a puppy with his girlfriend, not realizing how difficult it would be to care for a dog while in college. In an apartment. Would we be interested in adopting the pup? What do you think? 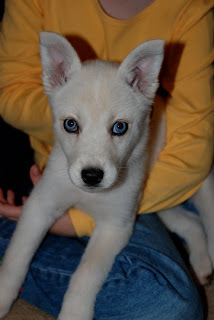 Chloe joined the pack. During the summer, we suddenly noticed two cats hanging around. Remember that I'm not a cat person? Well, starving animals break my heart, and these guys obviously had been abandoned. Oreo is part dog—she's mine. She comes when you call her, and jumps up like a dog to be petted. 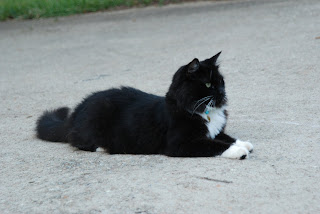 Someone cared enough to microchip her—but never updated the contact information. Sammy belongs to Kristen. For a very long time, he would only let Kiki the animal whisperer pet him. Now, he's gotten less nervous with the rest of us...but he's also turned into the true Tom cat, with torn ears and a scratched nose as battle wounds. We figured he had found a girlfriend, and decided it was time for the prowling to be done for Sammy.

So, last Friday, Sammy underwent the knife. Needless to say, he was not a happy fellow.

Have you ever experienced cat spray? Skunk couldn't be worse. Honestly. I feel well-punished. My car stinks. The entire house stinks. The downstairs, where Sammy is recuperating in a kennel, reeks. Friday night I woke up choking on the smell.

Please don't stop by—because I really can't let you in the house.

It's funny, because when thinking about pets and environmental issues, I realized that—with the exception of Maxi, who is spayed but from a breeder—we're pretty eco-savvy about our animals. I worried that we don't feed them organic pet food, we don't buy toys made from 100% organic cotton, we don't use hemp leashes. Still...we do two of the most important ecological actions as pet owners:

Whether it's from a shelter, from a friend, or taking in a stray, our pets are “recycled.” According to the Humane Society, between six million and eight million animals enter U.S shelters each year...and approximately four million dogs and cats are euthanized annually. That's about one every eight seconds. Not all of these animals are strays—many are the offspring of well-loved family pets. Puppies and kitties are cute...but they grow into cats and dogs. It's never a good idea to let a pet have “just one” litter. There are too many animals in shelters who need good homes.

We spay and neuter our pets.

Yes, we got punished for it by Sammy. Still, Sammy is an outside cat. I don't want to be responsible for his inability to practice safe sex. Spaying and neutering is the only way to ensure population control. If, as a pet owner, you want to be truly environmental—forgo the organic cotton Halloween costume for Fido and get him neutered instead. 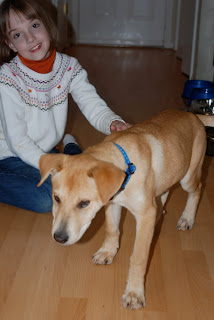 Sophie, our sweet little third pup who Peter found starving in the company's parking lot, is soon due for her spaying appointment. Thank goodness dogs are so much more civilized than cats...here's hoping for a much less odorific experience.

Did you know that the Humane Society sponsors a Spay Day photo contest? The site states: “Capture your pet’s essence in images and words, win a great prize.” Hmm. I wonder if I could capture Sammy's essence and submit it?

Anyway—it's a cool promotion with a great environmental message. Check it out:

I'm off to scrub the house...again. For you animal lovers, we'll continue our chat about environmental pets next time with interesting eco products and ideas to minimize Spot's carbon paw print.

Until then...have any great ways that you minimize your pet's impact on the environment? Do you have a “recycled” pet? Please share!

In case you hadn't noticed, I've been less than consistent in my writing lately. I'm distracted. Now, it would…