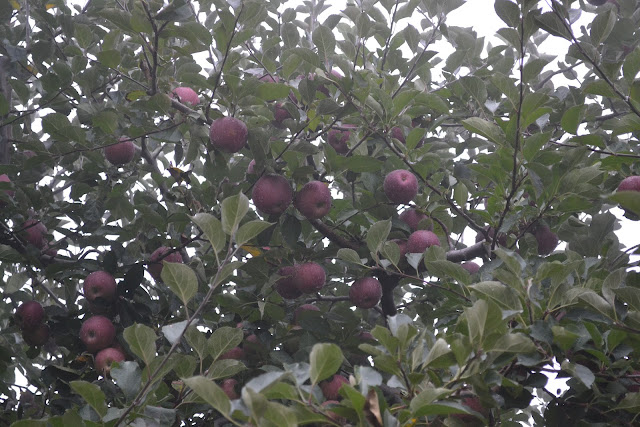 Yesterday, the chill arrived in South Carolina. Just Saturday, the kids and I sweated through horseback riding lessons. (It's very strenuous for me, watching them from the shady gazebo. Seriously. They might be hot because, well, they're actually exercising—but my sweat is more anxiety induced. Little people, big horses, cantering and jumping...I earn my sweat, too.)

Then Sunday arrived, overcast, gloomy, and Halloweenish. The chill in the air announced that it was time to head up to the mountains for our annual apple picking.

It's a family tradition. Apparently, judging by the hundreds of families on the mountain, it's not an unique tradition.

This year, for instance, our family expedition grew. 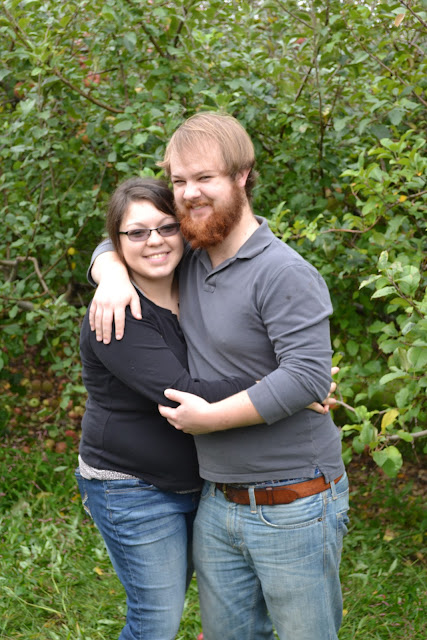 Tyler's sweet girlfriend of a year, Val, joined the party. It's good to have more female companionship!

Traditionally, we visit the orchard on a gorgeous day, enjoying breathtaking views of the 60 acres of apples, pears, peaches, and cherries. 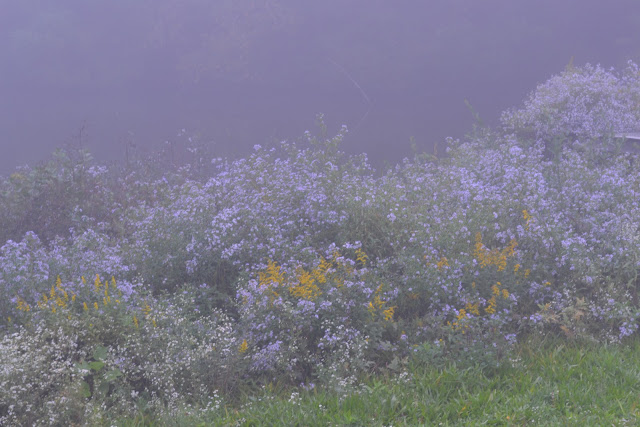 Typically, we walk to the far back section of the orchard in our quest for the perfect apples. Then we walk...and walk...and walk...back to the store, little legs complaining about the distance and little arms too tired to carry the full baskets.

This year, we broke tradition—but only because few varieties remained to be picked. Most of the trees were bare, with their fruit prepackaged and ready to purchase in the store. We found a few rows of trees, picked a few baskets of apples, and then bought the other required varieties in the store. 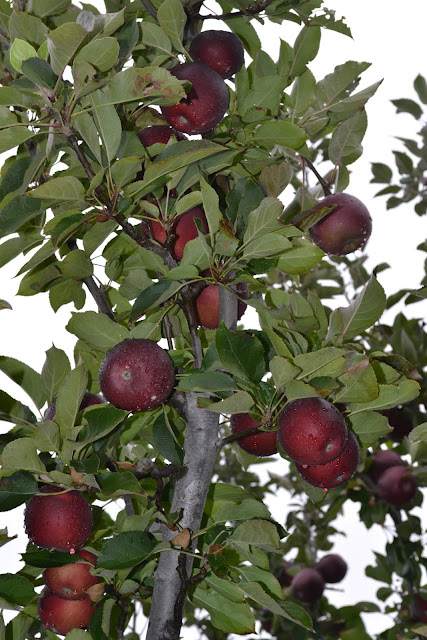 Traditionally, apple picking is a time that kids can run free in the orchard, with us keeping an eye on them. Watching kids have the freedom to play hide-and-seek among the rows, to climb a tree to pick the prettiest apple, to taste a just-picked fruit at its freshest—those are traditions I cherish.

This year, we were greeted with rules:No climbing trees. No eating apples.No riding on wagons. Honestly, I understand people can be thoughtless. After all, this orchard is the livelihood for a family, and visitors need to treat it with respect. Still, it made me a little sad that the owners needed to post rules, like “No throwing apples.” Shouldn't that be commonsense?

But I must admit...my family, which I usually insist follows all rules, broke several: 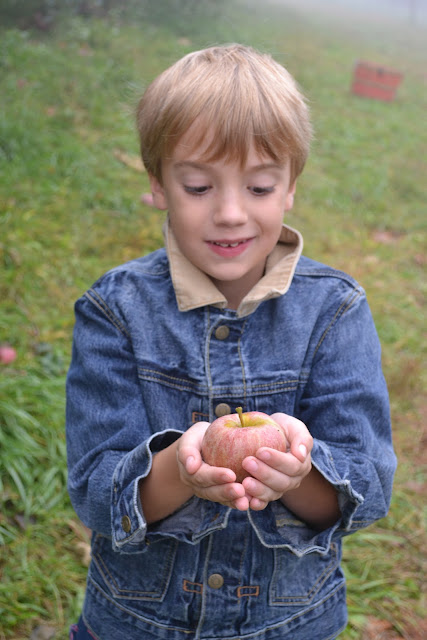 It's a tradition to eat an apple just-picked from a tree.... 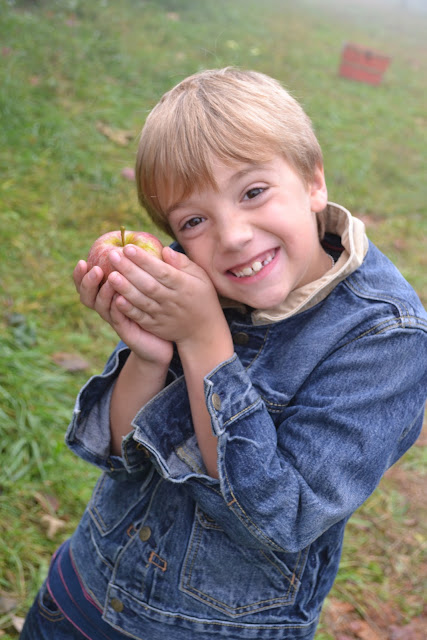 ...and to take a cheesy photo with the just-picked apple. 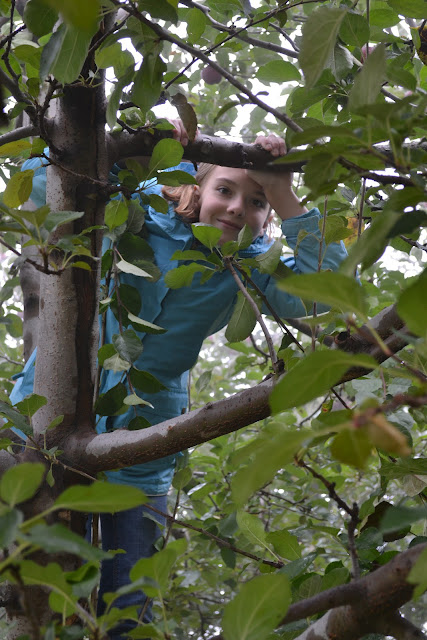 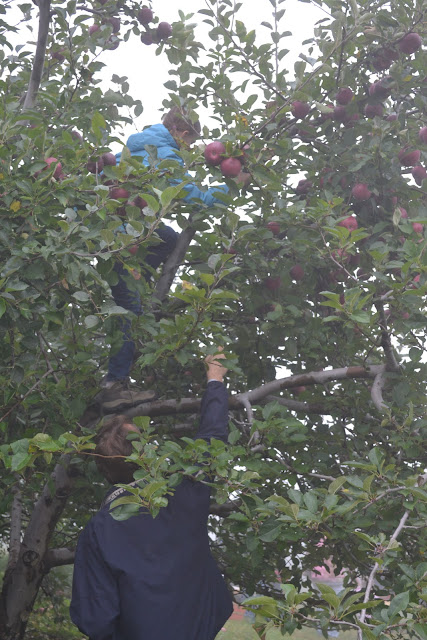 It's a tradition to send our little climbing Kristen to the top of the trees for the best, out-of-reach apples... 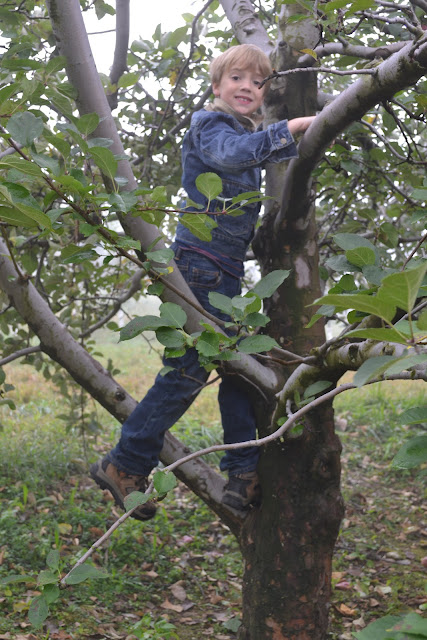 It's a tradition for the kids to play among the trees...

And it's a tradition for the kids to whine a bit when carrying their apples back to the store. This year, we wised up and used a wagon. 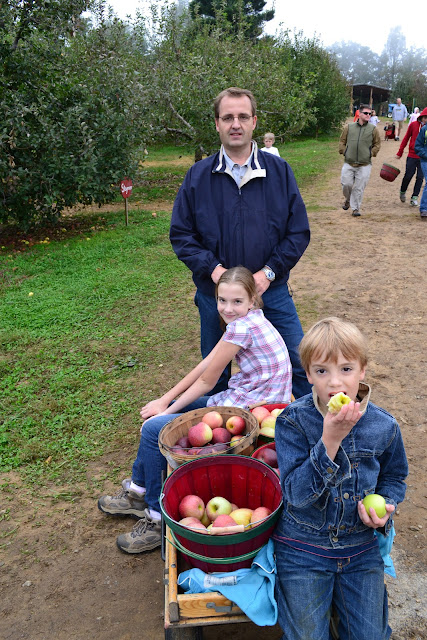 (We took the photo only to tease about the “no riding on wagons” rule...I can assure you that Peter did NOT pull them along with the baskets of apples! But Mikey is definitely eating an apple. Oops.) 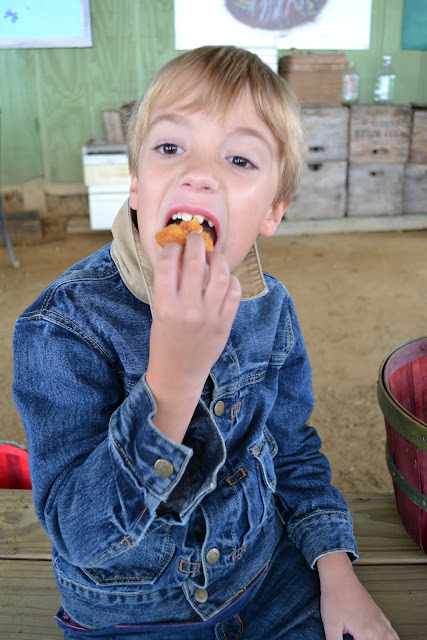 It's also a tradition to gorge on hot apple cider doughnuts... 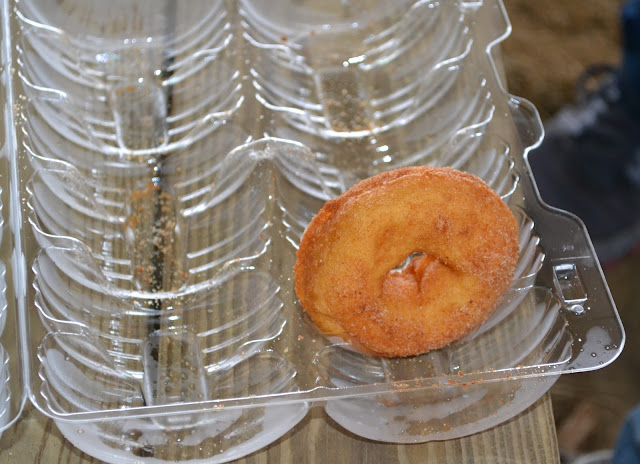 You can see some traditions never die! 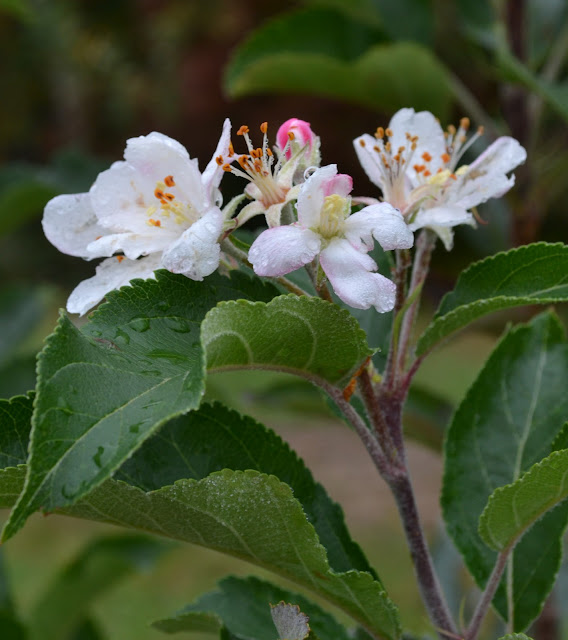 It's definitely not a tradition to find apple blossoms in October...poor, confused tree.

Apparently, it's become a tradition to buy a ridiculous amount of apples. We now have several bushels of apples residing in our refrigerator. Fuji, Granny Smith, Golden Delicious, Cameo, Arkansas Black, plus a small bag of Asian Pears...all waiting patiently to become  culinary delights.

(Although, at the rate Mikey is eating them, we might need more apples before Thanksgiving baking begins.)

A final tradition of the day: the season's first apple pie. 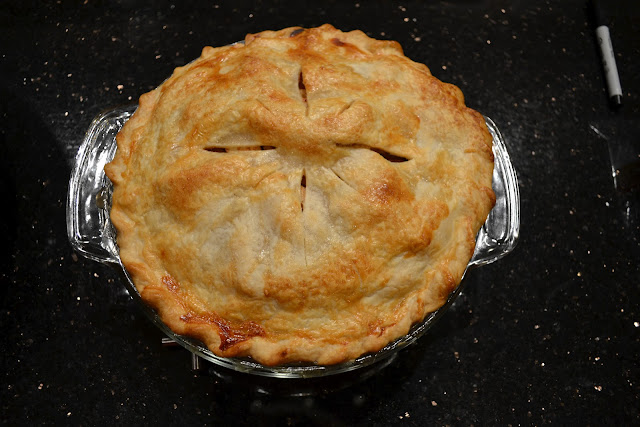 When the first semi-cool day arrives, Kristen requests apple pie—and hot chocolate. It's a fall tradition. She's actually been asking for both since October 1. Now, with the temperatures requiring sweaters, it's time to make my girl happy.

I must admit—I cheat. I'm sure I'll lose all credibility admitting this--but I use a prepared pie crust.

I remember too vividly my mother's anxiety over making pie crust. She always fretted that it wouldn't be right.

I don't know why she worried—it was consistently delicious. Still, I think her worry causes my hesitation to prepare homemade crust.

We have so many apples, though, that perhaps this will be the year I attempt to make a pie crust from scratch.

But after a long day of apple picking, I chose the easy route.

Bake 40 to 45 minutes on middle rack in oven until crust is golden brown. After 25 minutes, place a sheet of aluminum foil on top of crust to prevent burning. Cool at least 2 hours before serving.

Because I tend to be overzealous when peeling apples and fill my pie crust a little too full, I always place a cookie sheet on the lowest bottom rack in the oven to catch spills.

While not exactly a delight from our garden, perhaps next year's traditional first apple pie of the season will start with our little

It's cold. My toes are cold, my nose is cold. Soon, the greenhouses will serve a dual purpose of…

If you give a Mikey a gourd... ...you'll have silly photos to post when you're too sleepy to write.…