It happens every year. As the school days dwindle, I begin dreaming of summer...the fabulous trips we'll take, the places to explore, the lazy afternoons by the pool, reading and playing, the late-night Scrabble marathons, and the enrichment activities that will keep our brains fresh.

And then, suddenly, it's July 24, and I'm panicked. School begins in less than a month.

We haven't even planned our vacation.

Granted, we've been busy. I went to San Francisco with the Garden Bloggers' Fling--and I will write about those fabulous, awe-inspiring gardens soon. The kids attended camps—lots of camps. Zoo camp, sailing camp, Humane Society camp, plus Mikey added a Lego camp to his line-up. In fact, we probably scheduled too many camps, but the kids really wanted to attend these camps. Mikey tried to add a science camp—but I put my foot down. After all, the kids need to swim and play and just be lazy. It's summer, for goodness' sake! Then, Peter's parents arrived from Switzerland on July 9 and left yesterday. Needless to say, it's been crazy.

My vision of summer never matches our reality. I've blamed the torrential, non-stop rain. Or maybe it's the fact that Peter and I aren't very good at just doing nothing...which, in my daydreams, is really what I envision for summer. A chaise lounge by the pool, frosty drink at my side, book in hand, while our sweet children swim and play quietly together.

(Our neighbors will attest that “play quietly” is an oxymoron, at least applied to our kids.)

There is one thing, though, that always lives up to my summertime expectations: 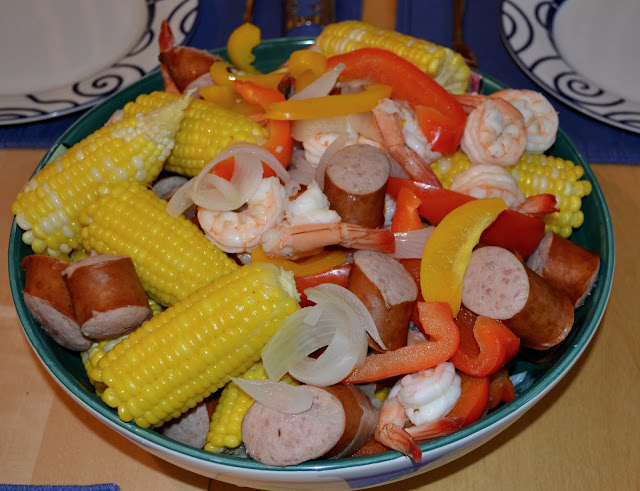 Now, fear not...no frogs are harmed in the making of this classic southern dish.

Also known as Beaufort Stew, Lowcountry Boil, or Shrimp Boil, this one-pot dish is, for me, the essence of summer.

Fresh from the field sweet corn. Succulent shrimp. New potatoes, just harvested from the garden. And the bonus? Just one pot to wash. Truly, an easy, delicious, finger-licking good dinner best served with an icy beer.

For the history buffs, Frogmore Stew originated in the Frogmore community on St. Helena Island near Beaufort. However, versions of Frogmore Stew exist throughout the coastal regions of the south. Some folks say that the dish is really just a compilation of whatever the fishermen's wives had on hand to throw in the pot. Personally, I like to add a little brightness to the traditional mix of corn, shrimp, and sausage by adding colorful sweet peppers to the pot.

Plus, the peppers soak up the spices and add a little surprise heat to each bite.

The hardest part of Frogmore Stew is peeling and deveining the shrimp. It's a nasty, time-consuming job, but I love shrimp—so it's worth it.

(I remember once when I was about 11 or 12, my dad bought five pounds of fresh shrimp while we vacationed at the beach. We had to peel and devein 5 pounds of shrimp, which took ages. I'm sure, being a preteen, I made the appropriate gagging sounds while I took out the veins. After it was clean, he boiled it for a couple minutes in salted water and chilled it to make shrimp cocktail. For years afterwards, he always shook his head and reminisced about how long it took us to clean that shrimp—and how we all devoured it in less than five minutes.)

Last week, during my in-laws visit, I thought it would be fun to serve them a traditional southern dinner and dessert: Frogmore Stew and Peach Crisp. The Peach Crisp, usually a no-fail staple in my dessert repertoire, didn't crisp—it looked more like peach soup. The Frogmore Stew, however, turned out almost exactly as planned. I posted a photo on my Facebook page, and several people asked for the recipe. Here, for your taste of a southern summer dish from a former Yankee girl, is my variation on Frogmore Stew:

(The meal feeds about 8 adults.)

FYI: If you have a ventilation hood on your stove, run it while the pot boils. The spices tend to make my eyes tear, and I inevitably start coughing my head off. Maybe it's just me, but it seems to help to have some ventilation while cooking. Or I'm just a spice wimp.

I have to say, my in-laws looked perplexed when confronted with the big bowl of food on the dinner table. They were good sports, though. My father-in-law commented, in his heavy German accent, that the mix of ingredients was “strange” to them. They had never eaten sweet corn!

Can you imagine? What is summer without sweet corn?

Strange or not, everyone seemed to enjoy Frogmore Stew.

Except our picky children, of course.

But that's OK. Because for a moment, eating my share of two pounds of shrimp and several cobs of sweet corn, it finally felt like summer.

Remember I said that the Frogmore Stew was "almost" as expected?

After we all finished eating, I suddenly remembered that I forgot to add the potatoes.

In fact, I never got them out of the pantry. Oops.

No one seemed to suffer from lack of potatoes, fortunately.

Now, it's time to book our vacation. We're thinking of taking the kids to Florida, somewhere along the Gulf, to snorkel. While I love South Carolina beaches, the water is too murky for snorkeling. Any good snorkeling beach recommendations?

Only 26 days until school resumes.

I think we'll need another Frogmore Stew before school begins.

Shared with Wildcrafting Wednesdays and The Backyard Farming Connection.

My friend sent me a Facebook message. She said she had the strangest dream. She dreamt that I opened…

Finding the Blooms in July.