It might not surprise you to know that as a kid, I possessed a rather overactive imagination. I spent a lot of time in my little fantasy world, plotting how I would save the Earth from an evil dictator, or how I would win Olympic medals in gymnastics like my hero, Nadia. My obsessive reading habit began when I was four, so I suppose that helped fuel these fantasies. 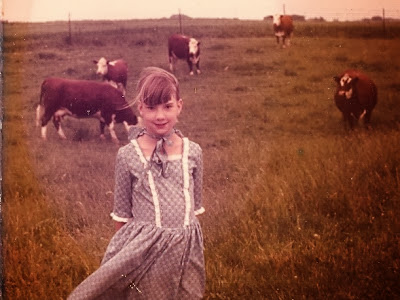 Laura Ingalls Fan Girl. Yes, I had a dress and bonnet. I know you're jealous.

Of course, the result of my heroism/fantastic athleticism/altruism would result in the quintessential honor--a seat next to Johnny Carson's desk. I'd charm Johnny with my quips while appearing both humble and intriguing. The interview would be so spectacular that I knew--knew with the certainty of my 8-year-old soul--that he'd offer me hundreds of dollars to take the place of that goofy side-kick of his. (I had no concept of thousands or millions of dollars back then.)

Oddly enough, I never made it to the Olympics, and I'd yet to save the world or invent the cure for cancer before Johnny left the air.

But, I did have the fabulous experience of talking with another John.

Gardening guru John Markowski, author of An Obsessive Neurotic Gardener, interviewed me, along with my friends Janet from The Queen of Seaford and Mia from Modern Mia Gardening for his podcast, which you can find here. So, if you want to know our most hated plant or the number one gardening tip you cannot live without, give it a listen. John is a great host.

And being a guest on his podcast was just as great as my fantasy of chatting with that other John. Truly. (Once John gets his own gardening TV show, I think he needs a side-kick, don't you?!)

Too Cold to Garden? Snuggle Up (and Win) a Good Book!

It's 27 degrees in South Carolina. I'm not complaining. Many northern gardening friends are posting chill-inducing negative numbers and…

Once upon a time, when I nervously signed the mortgage for my first house, I didn't rush to Pottery…