I'm not sick. I'm not taking a mental health day. And I've even entertained a visitor  this morning. I've been too busy to shower. 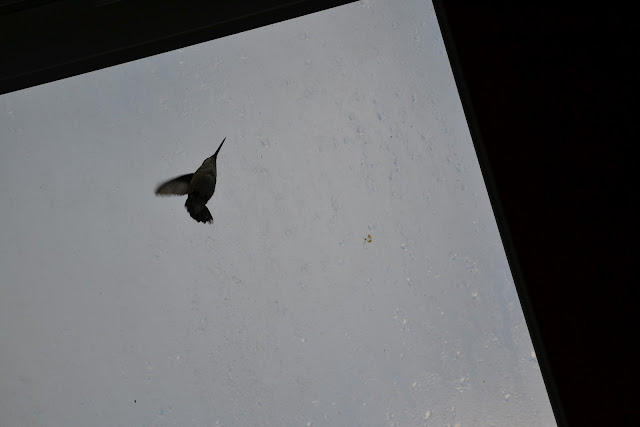 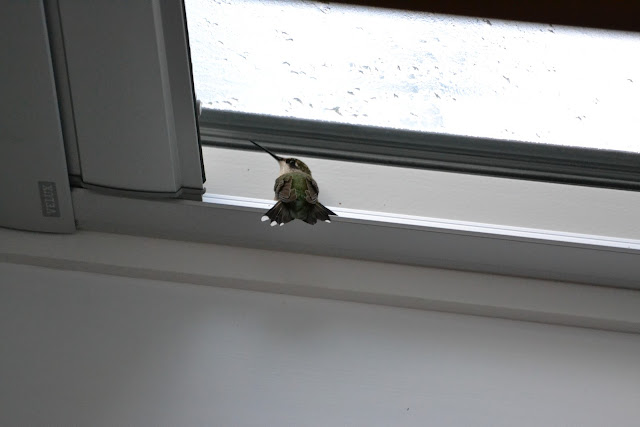 With gorgeous, fall-like temperatures this morning, I left the balcony door wide open to air out the house. And, as you know if you visit

often, our just-filled hummingbird feeders draw a lot of visitors.

One of our guests took an unfortunate detour.

at my desk, as I do every morning as soon as the kids head to school, I heard an odd sound from the living room. My first thought was: “Bad dog!” It sounded like something being shredded. I ran in the living room, looking for Chloe who, while extremely finicky about eating her dog food, will sneak people food at any opportunity. (Usually Sophie is blamed, but she just eats everything shamelessly. Chloe is sly.)

I didn't notice that both pups hadn't moved from their beds. In the office.

Then, I looked up. 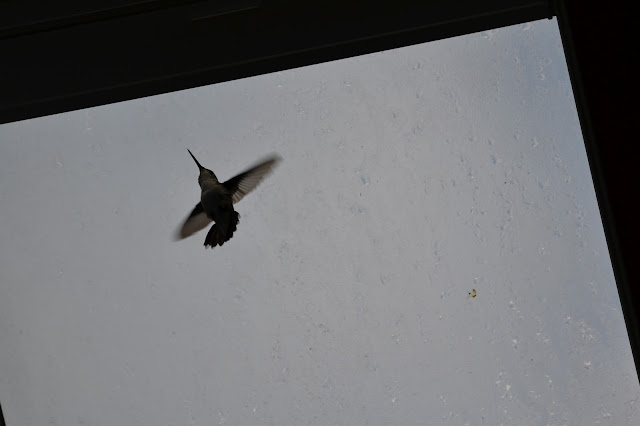 When we renovated the house last year, skylights seemed like a great idea.

Today, I cursed them.

Normally, if a bird flies into a house, the easiest way to remove it is to open a door or window, make the rest of the house dark, and let it naturally fly toward the light.

Of course, that's not possible when you have windows on the ceiling that don't open. 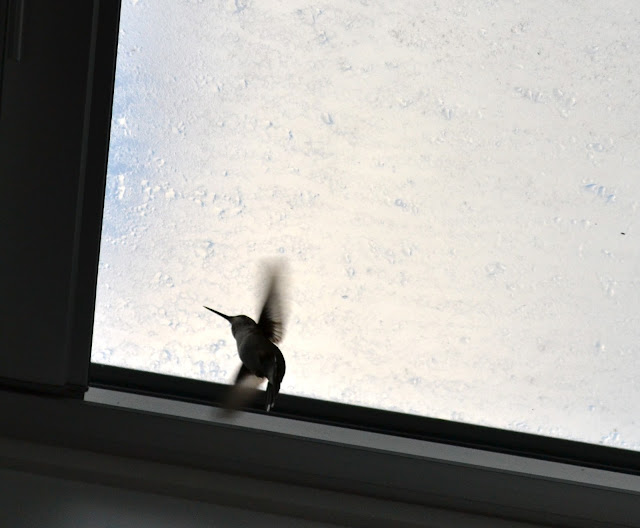 I thought about closing the shades on the skylights, but because the shades close via remote control—and the hummingbird used the channel as a perch—I feared injuring the bird or trapping it under the shade. 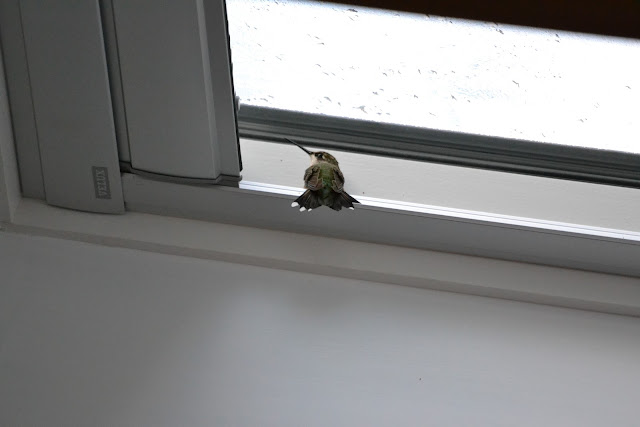 In a burst of creativity, I went outside (yes, in my PJs), grabbed a hummingbird feeder, came inside, and attached it to the handle of a broom. I stood on the couch, holding the broom/feeder over my head, waiting for the hummingbird to land on the feeder. It was, after all, becoming exhausted.

And then I spilled sugar water all over the couch, the floor, the coffee table...and me.

Note to self: couch cushions are not very stable.

Now, instead of the couch, I climbed a step stool and held the broom/feeder concoction. And spilled more sugar water.

Still, the hummingbird ignored it.

So, deciding the broom/feeder combination might be stressing out the poor bird instead of helping, I tried a more natural approach.

I cut two long branches of lantana, tied them to the broom handle, and held it up to the skylight. 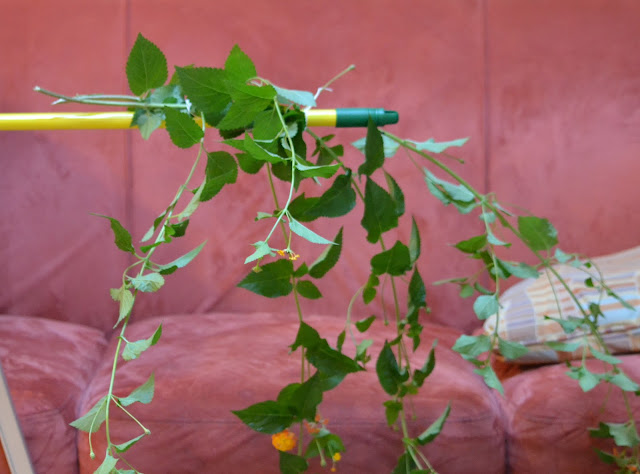 I mean, seriously—those birds can't get enough of the lantana outside the office window. Surely, the hummingbird would land on a branch to drink some nectar—it was really getting tired now.

(Can you envision it? Me. The top step of the ladder. Pajamas. A broom disguised as a lantana bush. I'm grateful no one was home to take a picture.)

The lantana truly was inspired, don't you think? The bird obviously didn't appreciate my creative genius. It continued to whack its tiny body into the glass.

Thankfully, the handle on the net was too short, even with standing on the top step of the ladder. I'm glad, too, because I'm afraid the net might have damaged the hummingbird's wings.

Argh. I hate when I can't solve something like a hummingbird trapped in the house by myself! Still, Peter is about seven inches taller than me, and I worried that the bird wouldn't make it much longer if it didn't get out. I left the room, hoping it might fly lower without me near, and waited for Peter to come home from work. (Thankfully, the company is ten minutes away.)

Of course, I couldn't stand it.

I peaked in the living room—and there it was, flying just above the picture on the wall. Then it perched on the frame. YES! I tried to sneak up on it, thinking to catch it in my hands—and then it zipped past my head, into the kitchen, where it promptly flew into the wall and fell onto the bench.

But when I looked closer, it was alive. Exhausted, but breathing.

I opened all of the kitchen windows, but then thought—if I catch it and release it from the kitchen, which is very high off the ground—the bird might not be able to fly. So, in my infinite wisdom, I decided to get the hummingbird feeder, put it on the balcony, catch the bird and place it on the feeder.

Of course, while I thought all of this, the hummingbird recovered from its bang into the wall, flew over my head...and behind the refrigerator.

Sometimes, it doesn't pay to think.

I was afraid what we'd find behind the refrigerator. 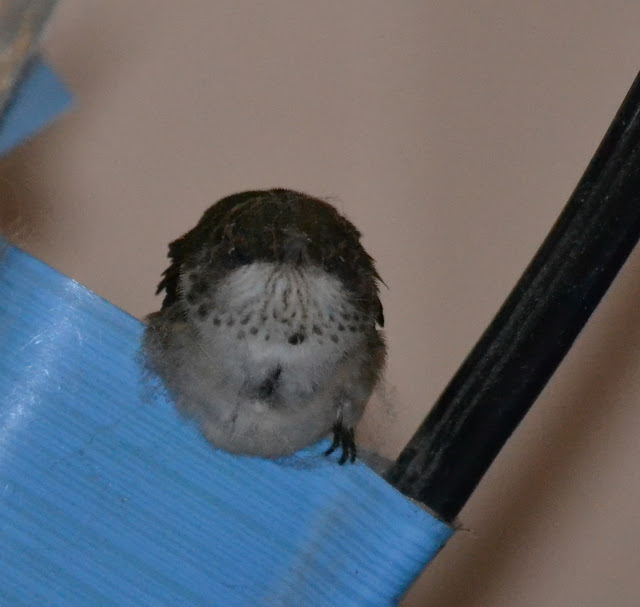 And there sat the hummingbird, covered in dust bunnies. (You're judging my housekeeping skills now, aren't you?!)

Peter carried the little fuss-budget to the balcony. It sat for a moment on his hand, and he tried to move it to the feeder. 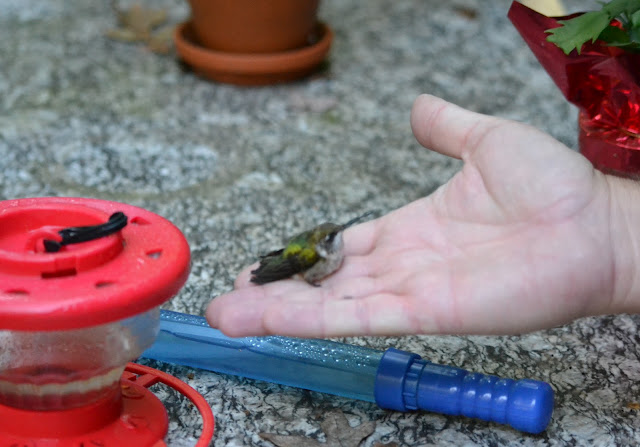 Instead, without so much as a peep, it took off and flew to a high branch in the tree. 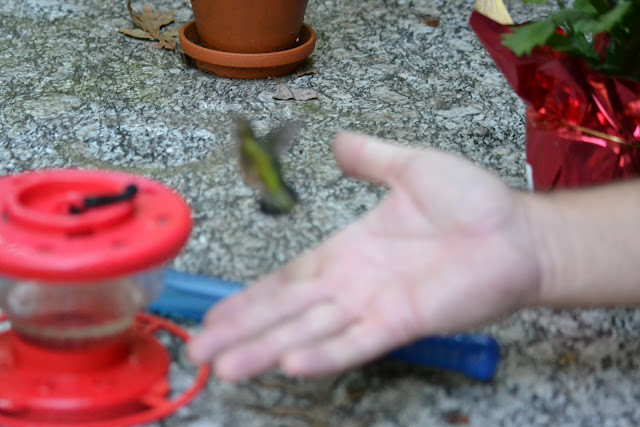 (Blurred by my excitement...)

We put the feeder back in its place, closed the balcony door, and waited to see if the hummingbird would venture down for a drink.

So, that's how I've spent my morning. I think it's now time for me to take a shower, get dressed, and perhaps try to get a few things done.

Like mopping up the sugar water on the living room floor.

After that, I might just hang out on the couch and spy on hummingbirds.

Note to self: always close the balcony door.

Happy Garden Bloggers' Bloom Day, sponsored by May Dreams Gardens ! Today, along with my first foray into pickling peppers,…

Friday, I took a drive. A two hour drive. Instead of writing or working in the garden, I wound…