We caught a killer.

And it was adorable. 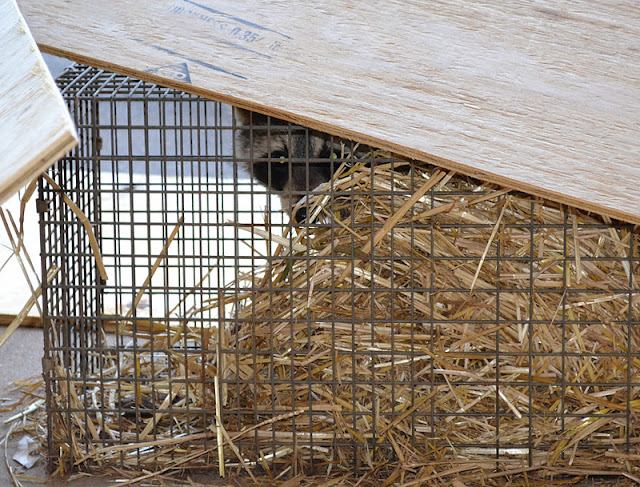 First, before I continue our saga...

(I shared your kind comments about our

with our chicken-mama, Kiki. Your sympathy really touched us—and she's feeling much better.)

After the raccoon attack, we moved the girls inside at night, housing them in a dog kennel in our basement to keep them safe, while we frantically worked to finish the new coop. Still, we worried that the raccoon would return during the day while they free-ranged in our backyard. Yes, raccoons are nocturnal—but who knew if it would come for a late lunch or an early dinner, now that it found a self-serve buffet?

So we borrowed a trap, baited it with scallops, and waited.

Five days after the attack—and after accidentally catching Roxanne in the trap, which scared an egg out of the poor thing--success! 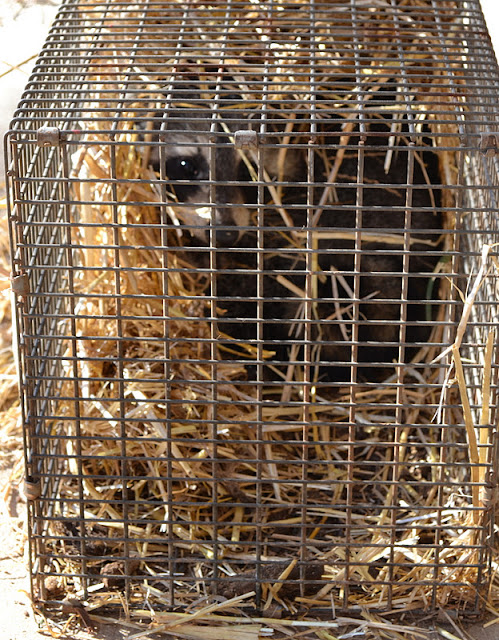 There are a few things you should know about us:

We love animals. We believe kids need to play in nature. We support wildlife organizations. I'm a card carrying member of Greenpeace, The Nature Conservancy, the World Wildlife Foundation. We've raised abandoned baby squirrels and released them into our forest. 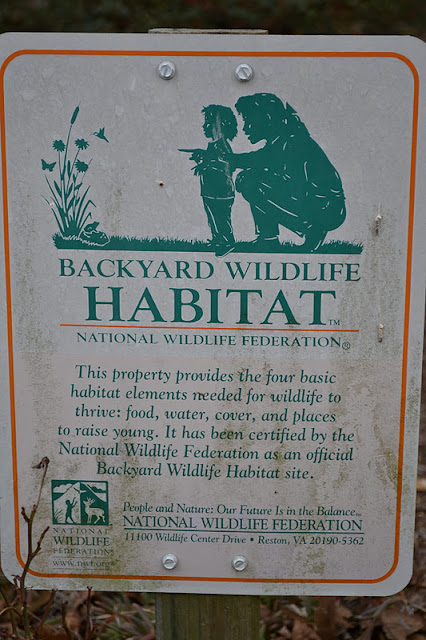 And we have a Backyard Wildlife Habitat certification.

(“Mommy, if you let me keep him, I'll clean his cage!” promised our youngest, Mikey. Hideous chicken-slaughtering beast turned darling potential pet. Even Chicken-Mama cooed over it.)

The irony of the situation isn't lost on me. In fact, while my husband took the kids to school, the guilt set in.

The killer now cowered in the corner of the trap, hiding behind the straw it had pulled into the cage to—what? Stay warm? Hide?

Our plan was simple. Catch the murderer and release it in the mountains where it could live a good, happy raccoon life—far away from our pet chickens. Peter and I knew a beautiful, forested, undeveloped area with a river, not far from where we hike.

While waiting for Peter to return, I worried about the stress level of the raccoon in the trap. I went to the computer and Googled “How to Minimize Stress when Relocating Raccoons.”

And found that, in all likelihood, we'd just handed it a death sentence.

No matter how carefully or where we relocate it, said the website, the raccoon's chance for survival is not good. Raccoons are territorial, and the existing raccoons in the area may attack the newcomer.

Our easy solution wasn't so simple, after all.

In fact, relocating a wild animal is illegal in some states. (I decided not to research the legality in SC further.)

If we release the raccoon back into the forest, our daughter's chickens are in jeopardy.

If we relocate it, we're removing it from its territory and potentially killing it.

And I kept it to myself.

Peter returned, loaded the trap into the van, and off we drove to the mountains, according to our plan. 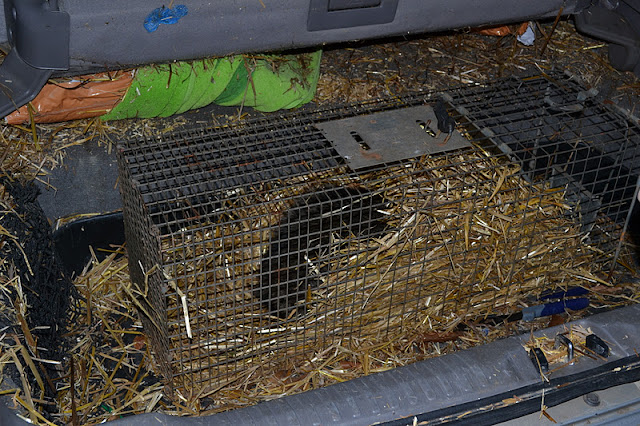 (If you're cheering for the raccoon at this point, you'll be happy to know...it paid me back by leaving a lovely, odoriferous memento in my van. Whew.)

We reached our destination and unloaded the trap. 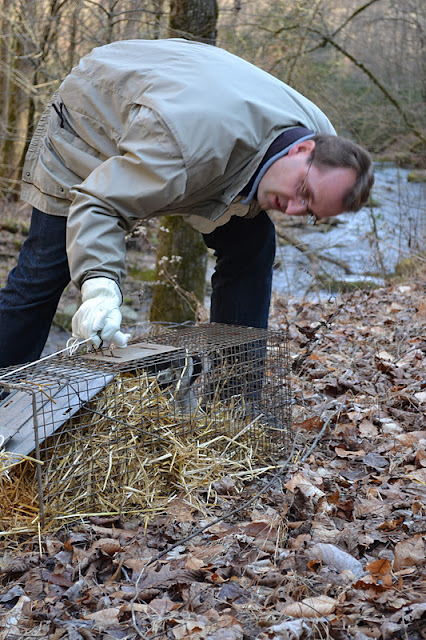 After a bit of coaxing and a look to Peter that said either “How could you do this to me?” or “I'm going to bite your nose off...” 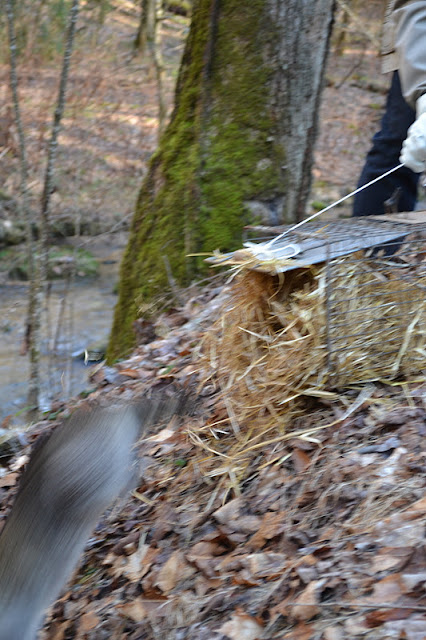 But was it, really?

We watched the raccoon for a bit as it swam through the river, ran along the banks, darted across the road, then ran back to the water.

And hoped we had caught and released the true bandit.

Being a naturalist or conservationist is not always such an easy decision. No matter what good intentions we might have, our actions impact the environment. We tried to resolve a predator versus pet conflict humanely.

But was our decision truly humane?

Still, I'm hopeful that removing the raccoon might keep our daughter's pet chickens safe. She is less worried—but more vigilant—about them. After all, I'm sure it's not the only raccoon in our neighborhood.

Soon, though, the chicken fortress will be complete, and the girls can sleep safely in their raccoon-proof home.

It's Monday. It's bleak. Dreary. Cold, wet, and nasty. My girlie is home with a tummy-ache, a headache, and…

We lost Salt this weekend. When we decided to add chickens to our menagerie, I knew the risks. We…