Welcome to Blog Action Day! (And you thought this was going to be another rambling about Diet Coke and eco-wine...HA!)

Today, thousands of bloggers throughout the world are working together to raise awareness of climate change--and to help generate ideas to improve our environmental stewardship. Let’s rip open a cask wine and drink to finding a solution for global warming!

In honor of Blog Action Day, we’re taking a little trip...a journey to one of my favorite destinations. A country that produces delectable chocolates, precision watches, and yes, wonderful husbands...

Two years ago, our family traveled to Switzerland to visit Peter’s parents, who live in Kreutzlingen, near the German border. I was nervous--it was Mikey’s first international trip, and the thoughts of eight hours on a plane with him were, well, terrifying. Remember the family who was kicked off the plane for having an unruly toddler? I was certain we'd be next.

My fears were unfounded. Mikey was a terrific traveler. Kristen was already a traveling pro by then, and Ty--well, what teen isn’t excited to go to Europe, even if it means spending serious quality time (two weeks) with his parents and much-younger siblings?

While my fear-of-flying vanished, I developed a new fear on the trip:

OK. We all worry about global warming--except for those poor, misguided few who refuse to believe scientific data and instead listen to the propaganda of the former administration. (Oops, sorry, this is a bi-partisan blog.) 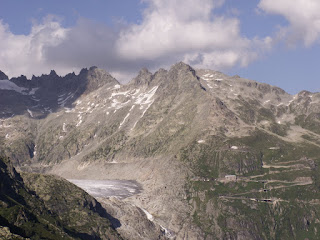 However, we worry about global warming in a theoretical, abstract way. We joke about the sweltering summers, we hang our heads about greenhouse gases, we write impassioned letters to save the polar bears. Global warming is a tough challenge to combat, especially when you don’t know, really, how one person can make a significant difference in our planet's health. Yes, we read the articles, listen to the experts, and watch the Planet Earth documentaries. But you know that cliche expression “a picture is worth a thousand words”? Well, imagine seeing the effects of global warming live, in person--right before your eyes.

Toward the end of our vacation, we spent a day playing tourists, driving through the major mountain passes in Switzerland. We picnicked at the Kleine scheidegg. Took photos in front of the Eiger. Drove to the Grimselpass. Took more photos at the Rhone glacier. Drove some more to the Sustenpass and took more pics at the Steingletscher. Peter’s parents thought we were crazy Americans for spending more than 14 hours driving around the country--and they were right. I hate to think about our carbon footprint after that day of driving...

The thing is--without our little road trip, I would still be talking about global warming in the abstract. I would quote Al Gore and environmental scientists, read articles and spout statistics.

Instead, I am now a Primary Source.

At each point along our road trip, we viewed glaciers. Gorgeous, breathtaking, Alpine glaciers... 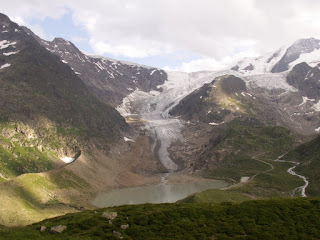 Take a look at the photo. See the ice? See the line where there’s no vegetation? That’s how much the glacier receded. The glacier should reach into the valley. Now you see it, now you don’t. The skeptics will say...check history. Glaciers thaw, then build up again. Sure, that’s been true...until now.

The current thaw continues to accelerate with no reversal in sight. According to BBC News, since the 1980s, Alpine glaciers lost approximately 25 percent of their surface. The Sierra Club predicts that by 2050, 75 percent of Switzerland’s glaciers may disappear. 2050! If our children return with their children in 2050, they may have a tough time finding the glaciers where we took our family vacation photos. Kristen would only be 49. 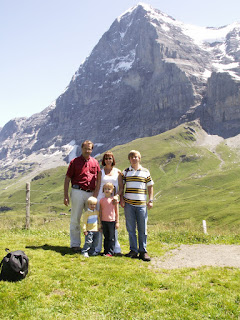 In fact, my favorite family photo, taken in front of the Eiger, shows a tourist mecca on the verge of collapse due to global warming. The Eiger East Face is crumbling. We’re not talking about just a few stones sliding down the mountain. In 2006, two million cubic meters of rock--enough to build two Empire State Buildings--split away from the main mountain. See that pile of rubble at the base of the mountain, behind my cute family?

What happened? The rock of the Eiger was held in place by the ice of the lower Grindelwald glacier. In the 19th century, the Grindelwald glacier reached far into the valley. Take a look at the photo again to see where the glacier ends now. As the ice melted, a mass of unstable limestone no longer had it’s permafrost layer binding it to the mountain. Melting glacial water entered cracks in the rock, causing larger fissures to open. Down went the rock.

As the glaciers continue to shrink, what, besides potentially devastating rock slides, will happen?

Glaciers are an important source of water, not only in Switzerland but worldwide. As glaciers recede, water levels in Europe’s rivers will drop substantially. In the months of June, July, and August, more than half of the water in the Rhine River is comprised of glacial melt water.

But now my worries have turned to fear. Because I’ve seen it. It’s real. And it’s time to step-up our efforts to make a difference... one day at a time.

What are your ideas to combat climate change? How can we help slow global warming?

For more info, check out www.blogactionday.org

Remember my promise to curtail my purchases yesterday in honor of Blog Action Day, thus reducing the amount of…

And now, a word from our sponsor...

Want to save money? Lose weight? Have more time? Live healthy and be happy? All for the low, low…